BingaraLatest NewsThe ArtsThree talented women … and one man share the limelight of the Roxy Theatre.

Three talented women … and one man share the limelight of the Roxy Theatre.

On Saturday April 14, 2018 soprano Alexandra Hutton will perform at the Roxy Theatre in Bingara. It won’t be the first time that the ‘local girl’ has sung there, but it will be the first time in over six years. Lexi is now based in Berlin, Germany with the prestigious Deutsche Opera and trips back home are rare and very special.

On a previous visit ‘back home’ Lexi performed with another soprano of renown, Peta Blyth OA. Peta received her Order of Australia for her services to music, especially for her support of young performers like Lexi, and for over a decade, she conducted ‘Opera in the Paddock’ at the property where she and husband Bill live, at ‘Mimosa’, Delungra. Lexi has performed at ‘Opera in the Paddock’ on two occasions as a young artist.

At this April’s ‘Opera Lounge’, and at an early time of 4pm, Peta will ‘perform’ as compere. She will interview Lexi and her accompanist Thomas Williams, a very talented pianist, formerly of Moree, and now studying for his Master of Music in Melbourne. Thomas too has spent years in Germany performing and so “Back from Berlin” is a very appropriate name for this Roxy concert. 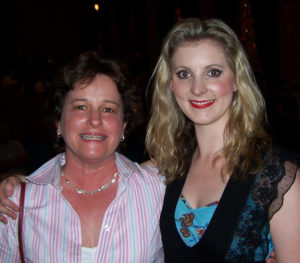 During a break in the musical performances, Peta will join Lexi and Tom, ‘on the couch’, to discuss their amazing musical journeys from rural Australia to the big cities and stages of Europe. They have been journeys where talent and persistence have been the keys to success, and with a little bit of luck along the way.

…and now, another talented woman has emerged from this area. Fourteen year old Sarah Heaton from Bingara Central School has been selected as a member of the ‘West of the Divide Concert Band’ that will tour Europe early in 2019.  [Find out more…]

Sarah plays the trumpet and sings, though not at the same time. As a young member of the North West Theatre Company, Sarah has acted, ushered and assisted with makeup, in a number of their shows.

She too hopes to go far with her music, but for now Sarah’s focus is on just getting to Italy and Croatia with the touring band, and the North West Theatre Company will help her, contributing some of the money raised at the “Back from Berlin” concert to go towards her airfare.

If you come to the “Back from Berlin” opera lounge on Saturday April 14, not only will you get to see and hear the talents of Peta and Lexi, but you might be shown to your seat by Sarah. After all, every journey has to start somewhere.