Tidy Towns Assessor, Daniel Barber, visited Bingara last week and was “very impressed” at what he found. Tidy Towns, the Keep Australia Beautiful NSW’s search for the tidiest community, also embraces a number of other categories stemming from the original concept. As well as the Overall State Tidy Towns Award, awards will be given a number of categories, including the Heritage Branch Cultural Heritage Award. 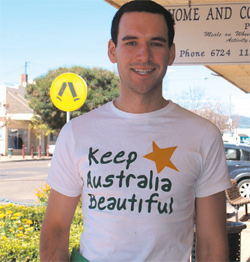 Daniel is one of 24 assessors who visited 100 towns throughout the state that had nominated for the awards, which is now in its 40th year.  Bingara and District Vision 2020 submitted an entry in the overall Tidy Towns section, as well as the Cultural Heritage award for the Discover Gwydir Forum #1. While he was in Bingara, Daniel spoke to Vision 2020 President, Rick Hutton, business people, Council, and “lots of people generally” about various aspects of the town.