The other contestants, who all provided tough competition for Alex were Beth Ozols, Megan Simpson and Amy Young. 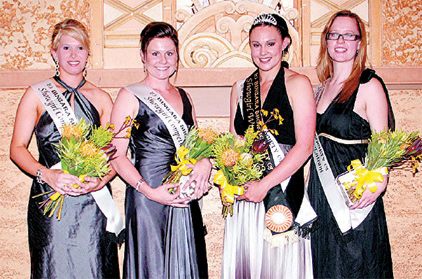 The judging of the girls had to be extended to a final two questions at the Ball to decide the winner, as the day’s selection process had failed to reach a conclusion.

Judges, John Coulton, Kerry Coulton and Kerry McDonald struggled to separate the contestants, who were all considered worthy of the title.

Mr Coulton commented that he had judged at State level for the Miss Showgirl competition, so he was able to say that all the contestants were worthy of being in the State final.

The two questions  the girls were asked were “How do you see the future for small towns like Bingara” and “Prime Minister for a day, what would you do?” All the girls said they saw a bright future for Bingara, considering the strength of its community which was evident at the Ball.

Mr Coulton, is the past President of the Agricultural Societies’ Council of NSW, has been involved in the show movement for many years and has a great deal of experience judging on numerous occasions at Zone level, as has his wife Kerry.

Mrs McDonald is one of the Trustees of the Showground Trust and is a member of the Show committee, having held many positions over the years, including President and Secretary.

The Ball was very successfully held at the Roxy, with 150 people attending.