An estimated crowd of close to 200 attended the official opening of the Willow Wing at Touriandi Lodge. 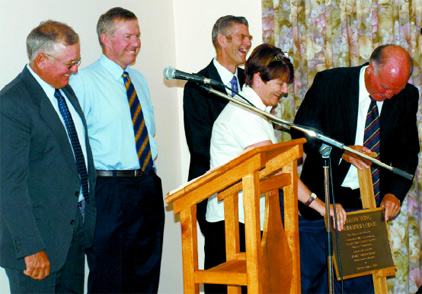 The construction of the Willow Wing provides 10 new rooms for residents, plus visitor’s overnight accommodation and other significant improvements have also been made.

Touriandi Ltd. Chairman, Kevin Hansen, described the opening as “one of the outstanding and significant milestones for the Bingara community.” He traced the history of Touriandi from when a committee was formed in the late 1980s to see the complex come to fruition. “The cost of the project was approximately $2.5 million, of which $1,355,000 was provided in Capital Grants from the Commonwealth,” Mr. Hansen said. The remainder, Mr. Hansen said, came from the Board and local organisations including the Gwydir Shire Council, and others.

Touriandi Manager, Anne Withers explained how the building had taken place without major interruption to the lives of residents and staff. “We wanted to ensure the residents’ care was not impeded, and worked to keep normality throughout the process, with regard to meals etc.,” Mrs. Withers said.

In the midst of the building, the Accreditation team visited for two days. Touriandi achieved accreditation, impressing the team.  Because of the increased size of the complex, extra staff and extra hours for existing staff have been necessary.

Member for Parkes Mark Coulton told the crowd he remembers going to see the Minister to put Touriandi’s case for funding. “It was my first visit to Parliament House, and Santo Santori was the Minister. Ten days later, he was sacked,” Mr. Coulton said.

The estimated cost of the building, Mr. Coulton said, then “went through the roof, particularly the dementia specific requirements.” He acknowledged the work put in by the Board and the staff in achieving the Willow Wing.

Member for New England, Tony Windsor, who officially opened the new wing, passed on the apologies of Minister, Justine Elliott. “These extensions have come about as a result of hard work of country people,” Mr. Windsor said. “If we do not have facilities like this, people leave. It is so critical, because people who go away want to come back.

Mr. Windsor and Mr. Coulton both noted that Bingara will be in the Parkes electorate after the next election.