A large crowd of current and former residents’ families and friends braved the heat on Saturday, December 1 and joined in to celebrate the 20th anniversary of the opening of Touriandi Lodge.

The Lodge was officially opened by the then Shire President, John Wearne, who also spoke at the celebrations. 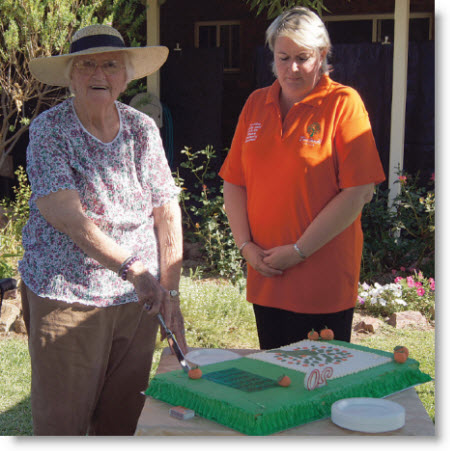 Stability is strong at Touriandi, with most of the staff having worked there for several years. The longest serving staff member is Tina McGarrity, who has worked at Touriandi for 19 years and nine months.

Mr. Turnbull spoke about early days of firstly the process of fundraising then running the Lodge. “It was a very steep learning curve for us,” Mr. Turnbull told the Advocate.

“When we first opened, we knew nothing about the dietary requirements of the elderly, and our first residents ballooned!” he said.

In his address John Wearne paid tribute to those he described as “the original Touriandi heroes. “This is a very fitting day to remember the effort more than 20 years ago, from people such as Peter Turnbull, David and Isobelle Muir, Brian and Judy Mack, Alf King, Rodney Brown and many others to raise $140,000 over four years as the contribution from the Bingara community to the new building.”

Mr. Wearne said the challenges of maintaining adequate aged care services into the future are quite different from those confronting the original committee in 1992.

“First I would like to explore with you the question; what defines a community? What makes it strong, cohesive and caring? What sets it apart from others that might be in danger of failing? Is it the quality of the road network, the number of businesses, or how many tourists that visit? While all of these are important, they don’t define a community as such,” he said.

What defines a community is the quality of its human services – how it nurtures its children, encourages its young, sustains a quality of life for people through their working lives, and, most importantly of all, looks after its old people. And therein lies our challenge for the future.

“The whole country is facing the financial and social challenge of how to accommodate and sustain services for a dramatically ageing population, and this is disproportionately a problem for rural, especially small rural, communities. A generation of baby boomers is currently joining the aged sector.

“Medical advancement is enabling us to have a life expectancy 10 years longer than we once had. Of all female babies born today, one in three will live to the age of 100.

In future, all three levels of government are going to have to commit ever increasing proportions of their budgets towards aged care. There is little doubt that, down the track, the GST will be increased simply to afford it. There is also the strong likelihood that public health and aged care will eventually be merged into one Commonwealth department to achieve the necessary economies of scale.

“So, what in the future for us? I can now return to my earlier comments about what defines a community, and suggest that we have all manner of advantages living in a small centre when it comes to providing quality aged care.

“And it is our size that provides that advantage. We have very real personal links between residents, carers, those responsible for administration, and the community itself. Or we certainly should.

There is a constant stream of disturbing stories of neglect in large aged care facilities in cities – and often in expensive facilities in affluent areas. It is impossible for them to have the close personal links that we can.

“The challenges for Touriandi, our Touriandi, are many, but the answers are all there. “We need to maximize engagement with the community, and here I give a big pat on the back to The Friends of Touriandi, encourage as many people as possible to visit residents on a regular basis, create an environment that makes people want to come here to live and to come here to work, and maximize the training opportunities for young people to enter the aged care workforce in their own town.

“Above all, the future will require efficient management, open, transparent and well publicized decision making which links with the whole community and a caring environment within Touriandi itself. It won’t be too many years down the track that further additions will need to be made to the number of rooms, it seems almost inevitable.

“I applaud what Gwydir Council is achieving at Warialda with Naroo, an additional 16 funded beds will provide a greatly enhanced Business Plan, and economies of scale will see Naroo operate on a much more profitable basis.

“So should we be positive about the future? Definitely! Should we be aware of what is ahead? Absolutely! And we need to meet the challenges head-on,” he said.

The Bingara Advocate dated Dec 5, 2012 has wonderful photographs taken on the day.