It was lights, camera and action last weekend as Gwydir Shire became the focus of a thirty minute Travel Oz television special on the New England and North West Region.

Hosted by TV personality Greg Grainger, this television event will be transmitted on the Seven Network here in Australia and to more than 21 million viewers worldwide through inflight entertainment, internet media and pay TV. 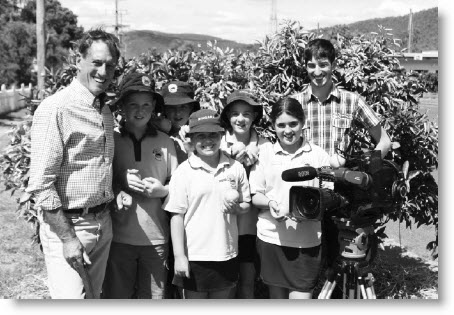 The weekend’s film shoot took place in the many tourist attractions of the Gwydir Shire including Ceramic Break Sculpture Park, the Gwydir River, Bingara Orange Tree Memorial, Myall Creek Memorial, Cranky Rock and the Roxy Theatre Complex.
Greg was very happy with the film shoot and believes it is going to make great viewing.

“What really brings a documentary to life is people; it was great to have so many of the local community involved in the shoot.

“It really gives viewers a sense of place when locals are involved’ said Greg.”

Greg was impressed with the Shire and said it was a place he would love to bring his family to live. ‘What a magnificent place the Gwydir is, it really offers the best things in life, wide open spaces, tranquility and community spirit’ said Greg.

Greg Grainger is an Australian film-maker and TV presenter whose works span almost 40 years in both high-definition travel and adventure documentaries to wildlife programs. He has numerous distinctions including a Logie Award winner for ‘Best News Coverage’ of the George Street Sydney bombings in 1972, Australia’s first terrorism attack; and 2011 Interactive Advertising Bureau Awards winner of ‘Best of Show.

Greg’s work now has him working closer to home; his current all-Aussie Travel program Travel Oz, has resulted in him being appointed one of Tourism Australia’s cultural ambassadors as part of the Friends of Australia program, and he is an Australia Day ambassador.

The program Travel Oz will air on channel 7 around late February or early March 2016.