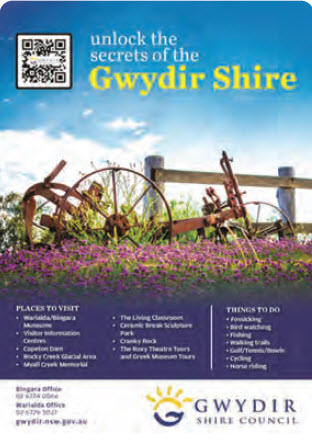 In the first edition of the new Gwydir News we reported on the “ambitious campaign” undertaken by Gwydir Shire Council to attract new residents to the Shire. It seems that since that time the campaign has gathered a significant amount of interest from places such as Brisbane, Coffs Harbour and Ulladulla to name a few.

The first goal of the campaign was to build a subscriber list of over 2,400 people who may be interested in a tree change, then marketing the Shire to them specifically through social media.

This goal was exceeded less than half way through the campaign and since then over 20 families have requested the Shire call them back to discuss the idea further, and to find out what the Shire may have to offer their families.

To date, four employers have been put in touch with these families with the view of filling positions the employers are having difficulty recruiting for. These positions have included farm work, education, hospitality and project management.

In addition to the marketing campaign, Council’s Manager of Business and Economic Development, Chris Turner, has been meeting with local real estate and stock and station agents to come up with ideas to promote the Shire to prospective real estate purchasers from outside the Shire.

Since the Campaign began local real estate professionals have reported an increase in enquiries and are now actively working to find more stock to sell as sales also increase.