When planning for the Slim Dusty Centre began about 10 years ago, Bingara man and devoted Slim Dusty fan, Trevor withers was one of the first to contribute.

Indeed, Trevor holds the honour of being ‘Mate No. 9’ at the museum.

Trevor watched the progress of the centre with interest, and always held a dream that he would one day visit the centre, which was opened last year. His dream came true last month, thanks to the generosity of Bingara couple, Tony and Jan Miller who drove him to South Kempsey to visit the museum. 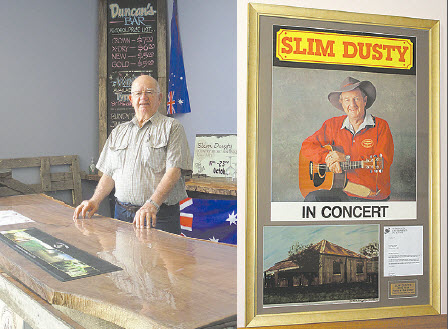 “(The paver) is right up at the front of where you walk into the museum,” Trevor said.

Trevor, Jan and Tony arrived at about midday, and were met by curator, Linda Coombes, who said “I know you.” Linda was carrying a photo of Trevor with one of his treasured framed records.

She then took her special visitors on an extensive tour of the museum.

Trevor saw the old purple car which Slim, his wife Joy McKean and band members used when touring Australia, and the old caravan he used on tour.

“It was long, it must have been custom made,” Trevor remarked.

“I liked seeing all the gold records on the wall, as well as the large number of photos.

“It was great to see him back in those days, he started in 1953, and his guitarist, Barry Thornton, travelled with him.”

The museum also includes other items of historical interest.

“I didn’t go around there, because I stuck to the slim Dusty side,” Trevor said.

The museum also includes a threatrette which shows films of slim Dusty’s performances.

“I looked at it a couple of times, but there was so much I wanted to see”.

During their visit, Trevor, Tony and Jan had lunch at the café, which also met with his approval.

Trevor spent about three hours looking at exhibits, taking in information about the family, Slim’s wife, Joy and daughter Anne.

Trevor said that when he first saw the museum, he was taken by the size of the building, which sits on 29 acres of land at South Kempsey.

“Jan and Tony were very good taking me over. We stayed in Walcha on the way back. Jan said she enjoyed herself.”

Linda Coombes said that Trevor had enjoyed his visit immensely.

“We were so very pleased to see Trevor so excited, to realise his long held dream of visiting the Centre,” she said.

Linda said she and Trevor speak every couple of weeks, “and he spreads the good word about the Slim Dusty Centre,” she said.

“He had a ball, took photos, it was a pleasure to see him so happy.”

It was in 1953 when Trevor first saw Slim Dusty perform.

“It was at the old memorial hall, where shire offices now are. I was disappointed that council made that their offices, because I like to remember Slim playing there. He used to follow the show circuit.

Over the years, Trevor has amassed an extensive array of photographs, records and memorabilia.

The Slim Dusty magazine has already featured Trevor, and he has been told he will appear in the next issue.

Friends who are aware of Trevor’s devotion to Slim Dusty have sent him photographs of iconic venues mentioned in his songs, such as Taylor’s Arm, said to be the first place ‘The Pub with no Beer’ was sung; and Three Rivers Hotel, in Queensland, which is famous because Slim wrote a song about the Three Rivers Hotel.

Slim Dusty performed at Beryl and Pat Stewart’s Green Valley Farm three or four times. Trevor was in the audience each time, and was honoured to meet Slim after one of those concerts. He also saw Slim perform three times in the Inverell Town Hall, and at Nullamanna.

It was at Green Valley that Slim signed some old 78rpm records which Trevor had. He had those records framed, with a small number of photographs with each one, tastefully arranged.

A valuer who saw Trevor’s collection was excited about the way the records had been preserved.

He has also had posters and other memorabilia framed. The biggest of these frames is a 4×5 foot frame which features certificates, photographs and valuations.

Trevor’s love for Slim Dusty’s music is rewarded every day on Radio 2NZ where Trevor provides the weather report for Bingara.

Announcer Neil Campbell, and Jerry Taveria before him, treat their weather reporter with a Slim Dusty song most mornings.