The Bingara under 8’s had another great game on Saturday against Glen Innes.  Their attacking game was outstanding with Brooke McKinnon, Isaak Johnson, Steven Todd, Thomas Young and Toby White all making it over the try line.  Xavier Smith made some good yards and Sam Mahoney was fearless in defence but with 7 players against their 17 they were tired out by the last quarter and went Bingara went down 44-26.

With only 10 players, the 10’s were on the back foot from the start with a massive 22 Glen Innes side.  Great tries by Jack Todd and Jake White and a conversion by Campbell Bond kept the spirits high.  Joe Lanagan worked hard taking the ball up and Miki Stamenkivoc and Andrew McGarrity showed great skill throughout the game. Final Score 44-16 to Glen Innes.

With Glen Innes fielding 27 players to Bingara’s 9 it was always going to be a one sided game for the 12’s.  Clayton Southwell and Liam Mack ran the ball well and the Johns-Bunyan brothers Ben & Tim showed great improvement.

The 16’s had a hard match against a very fast Glen Innes side, again outnumbered 24 players to Bingara’s 12. Andrew Weber and Jack Walton made it over the try line and all the boys tried hard and showed signs of having a great season.  Final Score 46-8 to Glen Innes.

Congratulations to Harry and Ned Abra for making the Group 19 representative sides. 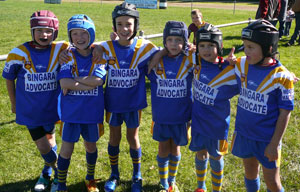 Bingara are at home this weekend to Armidale.  The kids would love you to come along and support them. Raffle tickets will be on sale for your chance to win an Australian Rugby League Jersey.  Game times are