An impressive line up of vintage and prestige cars parked outside the Roxy last Saturday caused quite a stir amongst passers by. 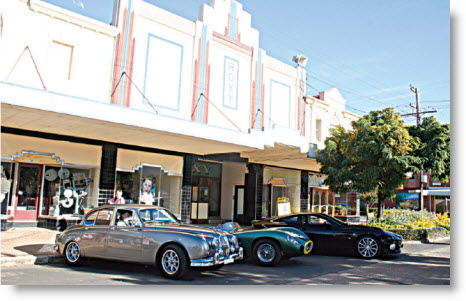 Members of one of the clubs, the Thoroubred Car Club previously visited Bingara in 2006. On that occasion, Jenny Mead took a photograph of the cars from the 60s parked outside the Roxy. Last Saturday the cars of that era were again assembled to replicate that photograph. In the photo were a Rolls Royce Silver Cloud, an E-type Jaguar, a Volvo, a Triumph and an Aston Marten open top racing car. Another photo was then taken with the modern cars assembled. These cars included an XJR Jaguar, a Ferrari, an Aston Marten and V8 Vantage Convertible.

The gathering included members of the Thoroughbred Car Club and the Aston Marten Owners Club. The two clubs from Sydney were involved in the tour because Mr. Daley, who is an avid collector of both vintage and modern cars, is a member of both clubs.

The group took the Putty Road from Sydney, visiting Nundle and Tamworth last Friday, before arriving in Bingara in time for dinner at the Roxy Café. Mr. Daley told the Advocate “we had a wonderful sit down dinner at the Roxy Café. Sandy McNaughton gave a fabulous presentation about the history of Greek cafes in Australia and in Bingara in particular. Then we watched a screening of the Iron Lady in the theatre,” Mr. Daly said. “We had perfect weather, and the view from the lookout on Saturday morning was beautiful. Everyone was very impressed with Bingara.”

According to Mr. Daley, there were two Greek men in the party who were fascinated with Ms. McNaughton’s address, one discovering that he was related to one of the original owners of the Roxy.

Mrs Carey told the advocate that the car enthusiasts greatly enjoyed their stay in Bingara and were very impressed with what the Roxy had to offer. She also confided that “one of the Aston Martens was worth nearly $650,000.”

After the Roxy photo shoot, the group visited the Bingara lookout, and the Myall Creek Memorial before heading for their next stop in Lightning Ridge.