“Unbelievable” was how David Young described the recreation of the iconic Tom Roberts painting, “Shearing of the Rams” which took place last weekend at North Tuppal woolshed, near Tocumwal. Mr Young reported that the number of people who visited the shed over the two days was extraordinary, with 4000 people there by 10am on the Friday.

By lunch time on Saturday 16,000 had passed through the shed. “It is 23 km to Tocumwal and there were cars queued back to town,” he said. 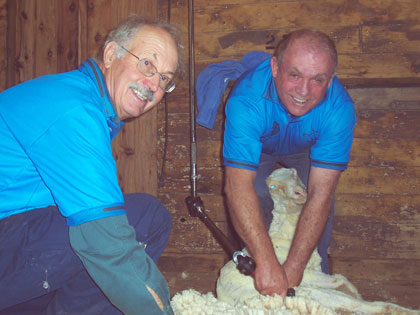 According to Mr Young, (who paid for the privilege to participate in the recreation), there were mixed reactions from the visitors, some complaining that they didn’t get a very good look at the shearing, while others said it was worth every second of the wait. One of the tour guides told him that he had never worked so hard in his life and when one person complained to him that he had paid $15 for a very short look, the guide responded saying “I paid $150 to show you around!”

Mr Young worked in the shed all day Friday and most of Saturday as a wool roller. The shearing board was 88 metres long, with 72 shearers working, 58 with powered handpieces  and 14 blade shearers. The shearers came from all around Australia and New Zealand. There were eight wool tables, four classers and 30 wool rollers, most of whom were actually professional classers.

Eight wool pressers kept the wool moving through the bins into four wool presses. Mr Young said there were so many workers “you couldn’t see the end of the board.” There was a team of men working “flat out” loading the bales of wool onto an old style wool wagon drawn by a steam powered tractor on the flat outside the shed. It took a load of about 25 bales of wool to a modern semi-trailer where it was reloaded.

“It was like Ag-Quip” outside, Mr Young said, “with all kinds of stands selling and promoting goods associated with the wool industry.” According to Australian Wool Innovation, the proceeds of the North Tuppal re-enactment will help to fund the Australian shearing team at the Shearing World Championships in Wales.

It took more than 10,000 man hours from more than 400 volunteers to refurbish the shed, where more than 6000 sheep were shorn across the two days.

A book commemorating the event is being produced by Sports Shear Australia.