‘Under the Spotlight’ showcase coming to Roxy Theatre

The North West Theatre Company is delighted to announce their plans for a feast of theatrical performances at The Roxy Theatre in Bingara this July. And you can be part of the show! 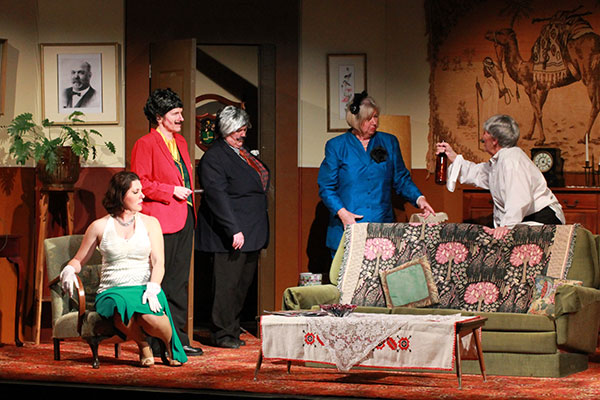 [Photo: Join the North West Theatre Company and have as much fun as the cast in “Murdered to Death” in 2015.]

In a return to the very first production, heralding the formation of the company more than fifteen years ago, the NWTC has decided to again have a ‘showcase’. This is a performance of theatrical pieces from the classics to the contemporary, drama to comedy, mimes to musicals. It provides an opportunity for performers and directors to have a go at  small plays, scenes and skits and the company is looking for new members to be part of the show.

The programme will consist of twelve items, including scenes from notable plays “Macbeth” by William Shakespeare, Lewis Carroll’s “Alice in Wonderland”, and two Australian classics “It’s My Party and I’ll Die if I Want To!” by Elizabeth Coleman and Alan Hopgood’s “And the Big Men Fly!” Add to these some musical excerpts from “Fiddler on the Roof”, Buddy Holly & the Crickets, the Andrews Sisters and some classic poetry and prose and there is something for everyone.

If you have always wanted to try something ‘on stage’ and have either not wanted to commit too much time or to the learning of lines, then this might be just what you have been looking for. Many of the pieces offer small parts, some even require mime, that is, no speaking, so if this appeals to you contact the NWTC through Bingara Tourism, or phone the President Rick Hutton on 0428 255 380 or email our Secretary, Tanya Heaton at nwtheatrecompany@gmail.com

Rehearsals will start soon but they will only involve a couple of hours each week through to Opening Night on Saturday July 14. There will be three other performances of “Under the Spotlight” – Showcase 2018, as matinees on July 15, 21 and 22.

Bookings will be available soon through the Bingara Visitor Information Centre and online.