The Unleash the Black Dog organisers spent the weekend serving food at the Delungra Campdraft, all in the name of their fundraiser. 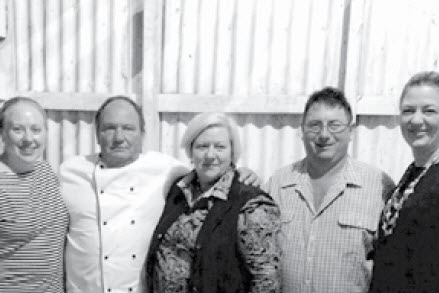 Organisers Angela Pritchard and Sarah Crump, with the help of members of Healthwise and the Bingara Lions Club served approximately 250 meals over Friday and Saturday nights with proceeds of the weekend being donated back into the Unleash the Black Dog fund-raiser.

“Larry McPherson of Gwydir Meats in Warialda, and also the Silver Sponsor of the ball, asked us to assist him over the weekend, and we were really happy to do so”, said organiser Angela Pritchard. “Gwydir Meats has been a huge supporter of this fund-raiser since its inception, so we were only too happy to take up the role of waitresses and kitchen hands”, she said.

“Both Healthwise and Bingara Lions Club will also receive a donation from the proceeds as a thanks for the time they gave over the weekend – it was lovely to volunteer with both organisations” Angela said.

Friday night saw a lovely campdrafters curry prepared and cooked by Bill Floyd, of Chef and Molly Jones. Bill is also the chef for the Unleash the Black Dog Ball, and will be hosting free men’s cooking classes this Saturday at the Roxy Theatre, Bingara. To reserve the your spot, contact Bill on: 0408 166 948.

Saturday night saw Larry McPherson prepare and cook a true blue Aussie roast meal, with all the trimmings, and dessert to top it off!

There is only two-and-a-half weeks until the Unleash the Black Dog Ball, and organisers say the night will be full of fun, dancing and good memories to be made. Going off last year’s event, this is guaranteed!