Home delivery pizza from 50km away? No problem for the Upper Horton Sports Club who, with dine-in options off the table, may just be doing the North-West’s longest pizza delivery route.

In true country-style community spirit the Club and its volunteers put on a night to remember christening its brand-new pizza oven, which although installed several months ago had yet to be fired up. 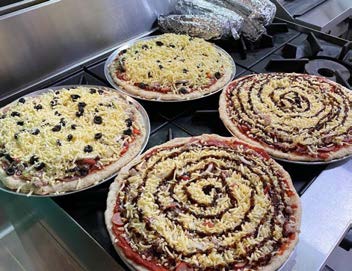 “We will be forever grateful that we had that funding for the pizza oven because we would never have been able to cook over 80 pizzas in one night,” said volunteer and pizza-maker, Brianna Mack.

After expressions of interest were tested in the week preceding, staff were overwhelmed with the interest and it turned out a much bigger night than they could have imagined. Drivers headed out on three different routes radiating Upper Horton, brightening up the evening of rural property owners, delivering 85 pizzas across the region in just one night.

From Upper Horton to Cobbadah, into Bingara and back again, through to Killarney Gap and Barine, the night was a huge success according to Brianna, who was quick to praise the local’s continual backing of the Club.

“We have a very supportive community. They use the Club as much as possible,” she said. After taking a bit of a breather the team will be back, perhaps delivering on different routes each week, but for now contactless pick up will go on says Brianna. “We just keep trickling along and will continue to cook each week.”