Bingara and District Vision 2020’s guest speaker for their June Dinner Meeting at the Roxy Conference Room was Penny Blatchford. Penny has sprung to national prominence for her work in fighting coal seam gas (CSG) exploration and extraction in the Bellata – Gurley area of Northern NSW.   She has featured on ABC TV’s 7:30 Report no less than three times, as well as speaking extensively on talkback radio, and, significantly, to date, she has been very influential. 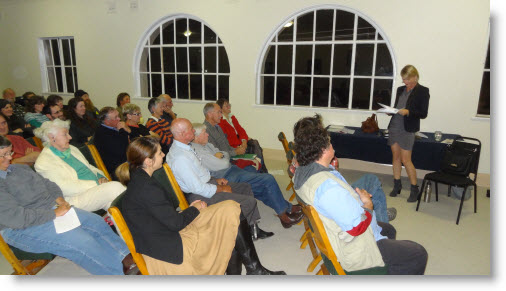 “Several months ago we asked Penny to talk about her experiences, and about how to organise a 21st century pressure group.” Said Vision 2020 President Philippa Morris, and added, “It is entirely serendipitous that an application has also been made for a Petroleum Special Prospecting Authority (PSPA) licence across much of the Gwydir Shire”.

Penny opened her talk by describing the day that dramatically “changed life” on the family farm that she and husband Rob operate near Gurley, NSW; a Sunday morning telephone call in June 2011 from a mining company whose representative, “wanted to pop out and get a contract signed to allow exploratory drilling, with a sixteen man camp to be established on the farm.” The camp was to be located on a piece of the property that the mining representative said, “that you don’t care about”. Penny asked the Vision 2020 meeting, “What farmer has a piece of land that they don’t care about?”

From then on Penny swung into action; first and foremost working to create an alliance of some 120 neighbours, similarly impacted local land holders. “So that the exploration company could not even get a foot in the door,” she said.

Penny worked with the Moree Plains Shire Council (MPSC) to establish a moratorium on exploration licences in the Shire, and commented, “that the MPSC and Narrabri Shire experiences, have been vastly different to one another with regards to exploration. Many landholders believe that gas extraction from sandstone recharge beds in the Pilliga Forest is already affecting groundwater. So even if it is not in your back yard, it soon could be,” Penny said.

“Under NSW law, outside urban areas, CSG drilling can take place right up to within 200 metres of a dwelling and within 50m of a home garden,” Penny explained, and added, “Remember too that drilling at the back of your property could be near your neighbour’s front gate. Had we signed this contract our children could now be playing in a gas field, because it is not just one well, it is potentially many wells; a landscape of wells and pipelines,” she explained.

Penny provided many pointers for pressure groups, starting with having a firm goal, in her case the cancellation of the PEL (petroleum exploration licence). “You must know your facts and stick to them and that means endless research and making no assumptions”, she said.

Penny’s campaign has been expensive to run, but her area has some big farms with some big hearts. “Contributions can be at any level – one person may offer expertise, another can offer money. To us no level of contribution is considered too small,” she explained.

“Networks have to be built at all levels; neighbours, all tiers of government, and the media,” Penny said, and she described how talk back radio hosts, in particular, can bring pressure to bear, and provide access to senior politicians and other media figures.

“In dealing with journalists, remember that they have to produce up to a dozen stories a day, and providing them with accurate well-written material reduces their workload,” Penny said, and offered Ten Tips for pressure groups;

Philippa Morris said “Vision 2020 is very grateful to Penny and Rob Blatchford for taking the time to come to Bingara to talk to us, and to the fifty shire residents who came to the meeting – including a carload from Coolatai.   We thank Councillors Catherine Egan and Peter Pankhurst for attending the meeting, and we want to emphasise that we are working collaboratively with Gwydir Shire Council to investigate this issue further and to enable the public to be informed and empowered to make their own decisions”.

Since the Vision 2020 Meeting, Gwydir Shire Council General Manager Max Eastcott has said that Council discussed the Gwydir PSPA application at a meeting on 29th May, “that was open to the public and attended by local media representatives”. He and Councillor Peter Pankhurst are keen to work with Vision 2020 to, “ensure that accurate information is disseminated to our community”. Mr Eastcott said, “The PSPA application – which has not been approved – is basically for a desk top survey, and no one can enter a property without the owner’s permission.”

“Bingara and District Vision 2020 is not a political group, but mining projects, like CSG extraction, fall outside a long established vision for our Bingara district, which has identified its growth pillars as agriculture, tourism, education and conferencing,” Philippa explained. “The ongoing support for Vision 2020 dinner meetings by New England Mutual, as always, puts the community back into mutual,” Philippa concluded.