BingaraLatest NewsGeneralVolunteer Sid jumps into action for the Warialda Show

Volunteer Sid jumps into action for the Warialda Show

After an absence of over 10 years, dog high-jumping will be back at the Warialda Show this Saturday evening.

Last Friday, Warialda P&A volunteer, Sid Conway, watched by his human, David, tried out the new jump made by Alan Campbell at the Warialda Showground, and gave the new jump the paws up. The dog high-jumps will be held at around 5.30 to 6pm, depending on whether other events have concluded. 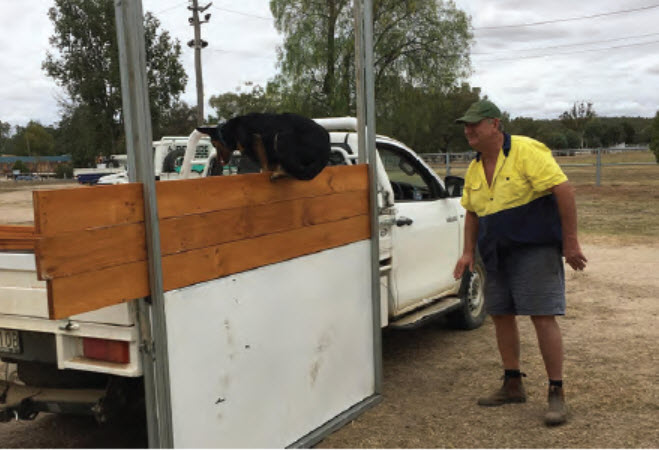 Sid is not yet sure if he will be a competitor in the high-jump, as he and David will be busy bringing sheep into the Showground for the Yard Dog trials.

Warialda P&A Secretary, David Coulton, is looking forward to strong entries in the yard dog trials. At least 15 competitors at a recent dog trial event in Moree indicated they would be bringing their dogs to compete at Warialda. “We also get a strong local contingent, so competition will be very good,” Mr. Coulton said. Dog races will be held during the afternoon if sufficient entries are received.

While he is keen to stay on to watch the billy boiling competition, the farmers’ challenge and the Demolition derby, Sid said he might go home before the fireworks. “Dogs don’t like fireworks, so I think I might call it a day before they start,” he said.