Water safety from the beach to the bush

With Christmas holidays just around the corner and many families heading to the coast for an ‘Aussie’ summer holiday, a visit recently to Bingara Central from Surf Life Saving NSW’s Beach to Bush Program was timely.

The Beach to Bush Program was established in 1994 and designed to teach people in regional, rural and remote communities about surf and water safety. 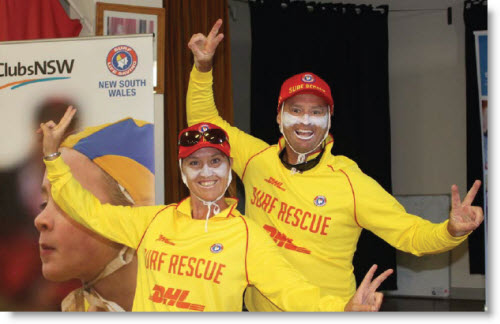 Beach to Bush presenters and Surf Rescue Lifesavers from South Narrabeen, Andy Cross and Angie Thorpe know all too well that nature’s magnificent playground (the ocean) has many hidden dangers.

“The Beach to Bush Program was established in 1994 after it was discovered that around 50% of rescues, preventatives and first aids which took place were performed on people from the country,” explained Andy.

“We are pleased to say that this percentage has greatly reduced since the program first began.”

The program which took place at the school, was a fun, hands on presentation featuring lots of zinc, props and class participation, aimed at teaching children about staying safe at the beaches including the importance of swimming between the flags.

The presentation also incorporated some water awareness skills related to local swimming areas including the river, town pool and dams.