The 29th annual Upper Horton working dog trials were held over the June long weekend. The event drew a large number of contestants and spectators again this year, with the event slowly growing from its initial one day format to now span four days.

The competition was fierce in all categories with a strong field of competitors from right across the state battling for the prize money. 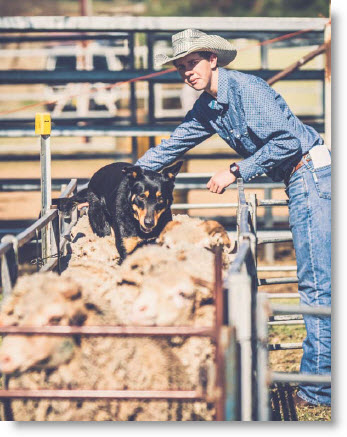 The Paul Hodges Memorial Trophy and the Champion Open Yard Trial was won by John Rosten from Armidale, with two good runs from a strong field of finalists. Greg Addis from Moree won the Maiden trial, while Peter Hogan took out the Novice trial.  Sam Tombs from Armidale won the Encouragement trial.

Sunday saw the ever popular dog high jump with the title going to local entrant, Delta, who cleared an impressive 6ft 11 inches to claim the trophy from a large field of contestants.

The working dog auction was also held on Sunday. The usually well supported event was somewhat disappointing this year with only 7 dogs entered for sale and the majority of those being passed in. The top price went for $800.

“Many competitors commented on the high level of competion and the friendly atmosphere,” said Barry.

“On behalf of the committee I would like to thank our many volunteers and the generous support of our sponsors.”

During the welcoming addresses the committee was gifted a beautiful coffee table book which recorded the results and history of the event since its inception in 1987. Anyone interested in securing a copy of the book is encouraged to contact the committee so numbers for a print run can be confirmed.