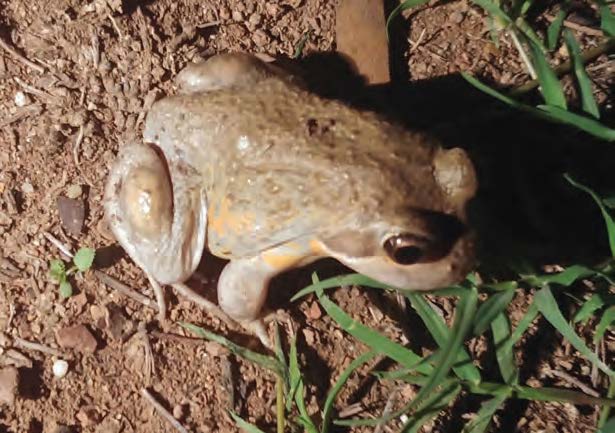 Not a cane toad! The delightfully-named Eastern pobblebonk, or Eastern banjo frog (Limnodynastes dumerilii), is coming up after the rain. This frog would have spent several years buried and waiting for the drought to break, and was spotted at Bingara. The frog takes both its common names from the banjo-like “bonk!” of its call.

Recent rains have brought seldom-seen wildlife out and about, especially on roads, as animals that may have been hibernating have become active, or those moving about following the fresh feed and ground cover.

Coolatai ecologist Alex Dudley asks that residents be careful, especially on the roads – dozens of eastern long-necked turtles have been seen out on the roads as they seek new waterways.
“They can smell water from 10 kilometres away,” Dudley says.  “Long-necked turtles are actually very long-lived.  What happens when we get these drought periods is that they bury themselves in leaf litter, in mud – they’d have been hit really hard by fires, by pigs, and by foxes because they were normally in water.”

Following the rains, these turtles will be out looking for new water bodies, and are very vulnerable with traffic.

With the current drought being as harsh as it is, it might’ve been the first time the water bodies have dried up, and turtles will be looking for a new water place to live.

The turtle is one of the more frequent casualties of the road, sadly.

If it’s safe to do so, Dudley recommends moving them off the road if you can.  “Pick them up by the top, at the front and back – because if you pick them up by the side they’ve got a gland which secretes an unpleasant smell, and just put them on the side of the road in the direction they were heading.”

Frogs, of course, will be out more frequently after rain, with some species having spent years dormant in the ground, waiting for the wet.  The eastern pobblebonk, or banjo frog, is a burrowing frog that may be seen around Bingara. “He would’ve spent a year or two underground, waiting for rain.  “I think it’s interesting. It’s going to take a year or two for animals to bounce back – the numbers have been pushed so low.”

Things like Burns dragon, normally quite common around Coolatai, have become very scarce.  The amount of food has been on decline for quite some time, which drove animal declines all the way up the food chain.  But as the grass comes up, more life will return.

Seed heads on the grasses will bring birds like double-barred finches, and there’s a good chance red-browed and plum-headed finch will be seen.

Drivers are more likely to see more reptiles out on the side of the road, as the bitumen will become one of the few places left unshaded.  But the main fear of the bush driver – kangaroos – may be less of a hazard going forward.  For one, Dudley says, their numbers simply got smashed by the drought, so there were fewer and fewer to be hit by vehicles.

But most importantly, roos previously hung around roadsides out of necessity, as the verges were the only place left with feed – as the rain sprout grasses all over the place, kangaroos can again move back away from the roads to feed.