What is an Opera Lounge?

In a changing marketplace the traditional Opera House has sought new ways to deliver the beautiful music of opera to those who love it and to those who are yet to discover it. Just as the ‘Three Tenors’ introduced “Nessum Dorma” to a wider audience, the Opera Lounge is a style of musical presentation that provides for the loveliness of opera without the big scale staging.

Bingara’s Lexi Hutton is now well established with one of the world’s great opera ‘houses’ Deutsche Oper Berlin. Lexi started there five years ago as a young artist. Now she is an established member of the ensemble, playing some of the great operatic roles like Susanna in Mozart’s “The Marriage of Figaro”, and Musetta in Puccini’s “La Boheme” on the big stage in Berlin.

In ‘opera’, singing takes on a pure, highly technical, almost instrumental form. Opera Australia describes the difference between ‘popular music’ and ‘operatic’ singing as follows:
Singing in the Western world is now generally divided into classical and popular styles; the main differences concern volume. Essentially all singers, in all ‘pop’ fields depend upon the microphone. This enables them to deliver their message in a conversational or whispered style of great intimacy as well as a loud and dramatic style.

Operatic singers on the other hand, mostly still depend on their own unamplified voice, which they must be able to project to the back row in a large auditorium. In order to make the large sound needed to fill an opera house without using any amplification, the singer must use all the natural resonance of the sinus cavities in the face and head. These natural spaces are, in effect, like little amplifying ‘echo’ chambers.

The opera singer must focus the tone so that the sound travels forward from the mouth, and they must breathe correctly. Proper breathing requires using the full capacity of the lungs. As the lungs are fully filled, they displace the diaphragm, a membrane which stretches across the base of the chest cavity; then, using the strength of this membrane, the air is expelled in a controlled fashion. ‘Diaphragm breathing’ which gives the voice maximum projection is also a major source of the vibrato, the slight waver in the voice which characterises the opera singer’s sound.

Lexi has been working on her singing craft for many, many years. She still looks for new techniques and ways to vary her sound. She has found that different teachers will provide new ideas on how the sound should be made and the music interpreted.

“I was delighted to hear Lexi sing at Deutsche Oper Berlin at Christmas last year in the role of Musetta in “La Boheme,”said her father, Rick Hutton. “… where, in an auditorium with more than 2000 people, she could be clearly heard, her voice carrying over an 80 piece orchestra, which included six double basses.”

On April 14, this year, at the Roxy Theatre in Bingara, Lexi Hutton will sing, with the accompaniment of just one piano, played beautifully by Tom Williams, formerly of Moree, but now entrenched in Melbourne after several years in Germany.

Not only will Tom play and Lexi sing some of the most beautiful opera music, they will also take time, in true ‘Opera Lounge’ fashion, to tell the story of their incredible journeys in opera. Tickets for the afternoon performance, which includes a high-tea to follow, are now available on-line, or through the Bingara Visitor Information Centre, phone 6724 0066. 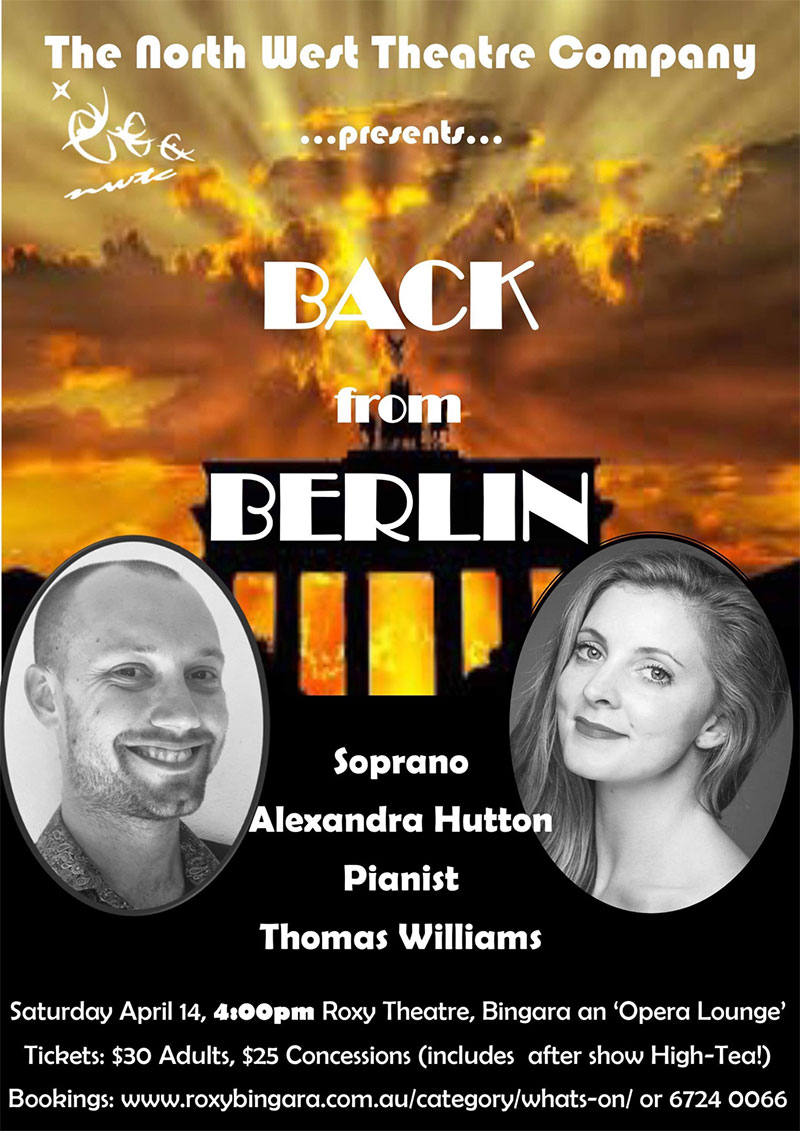