Where the wild things grow

“There is lots of food out there growing wild!” These were the words used by Diego Bonetto to introduce himself to a keen group of foragers last weekend at The Living Classroom in Bingara.

Diego is based in central Sydney. He makes his living conducting workshops and tour groups helping people to discover the hidden larder of foods at our doorsteps, beside our roads, across sand dunes, and creek banks and in our forests and national parks

Many of the plants Diego and the group were looking for were known to our parents and grandparents as foods, but today, with much of our food being processed, packaged, trucked and displayed on supermarket shelves, we have lost touch with most of these ‘wild foods’, just considering them as a nuisance.

Dandelions, stinging nettles, farmer’s friends, plantain and thistles have settled into the Australian environment, and gone wild. We call them weeds and try to kill them, but they keep coming back. Better that we understand them and even appreciate them as potential sources of high value nutrition.

“Wild foods might not have the same tastes that we know and love, but many are highly dense in essential nutrients.” Diego explained. “They are nutrients that our bodies need, as do our grazing animals, like sheep and cattle. 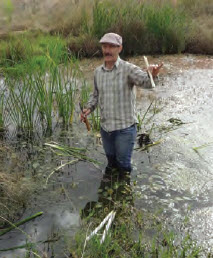 Diego puts his foraging skills to use.

Some are good for us in small amounts but could make us sick if we ate too much, or may be toxic to grazing animals, but then again so too is an excess of many of our common foods especially those with excesses of salt and highly refined sugars.” Diego said.

Despite the long dry period, Diego and his fellow foragers found many ‘wild foods’. Scotch thistles, nettles and cumbungi led the way. Cumbungi is better known as bulrushes, and it is a food staple of indigenous people in Australia and in many other parts of the world.

To harvest the cumbungi we had to go wading, because cumbungi is a water plant. Several buckets full were gathered and Diego and meal designer Marnee Fox prepared the stems and rhizomes to be used in coleslaw, part of an amazing meal prepared to launch the vegetarian component of the feast held at the Roxy Theatre on Saturday May 5.

That event launched the arts based project called, “An artist, a farmer and a scientist walk into a bar…”