Will Johnstone: An inspiration to his peers

When Will Johnstone was just one month old he died twice, 18 years on and he is now running his own business and ready to take on the world.

People who know this popular young man are aware that Will has a disability but in a community such as Bingara, this is not an issue, but is instead seen as one of Will’s inspirational assets. 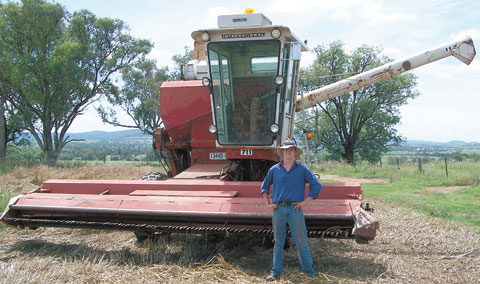 Will pictured with his 18ft Open front header, ready for the harvest season.

Will was born in 1992 with mild cerebral palsy, was moderately to profoundly deaf and had a bleed on the brain which followed with many operations and 18 days in acute care. At an early age Will’s parents Jill and Clint Johnstone were told that Will would be lucky to survive to the age of 15. The mere fact that he has battled and survived such medical challenges during his life is only the beginning of this young hard-working man’s story.

Will was about eight years old when his family moved to Bingara, where he began attending Year 2 at Bingara Central. To the credit of the Bingara community, it didn’t take long for Will to be accepted into the community with him vaguely remembering any form of bullying during his time at Bingara Central.

Tamara Doyle, came into Wills life when he was just one year old and has been there ever since, not only as his support aid but as his friend. Tamara, as Will said ‘helps me all the time’. She taught him to sign, and worked as his interpreter during his schooling years. Not only did she help him at school but she travelled with him and was with him through many milestones of his life.

As one observes Will today, his smiling happy composure is welcome every where he goes, an ambience is felt as the whole community watches as he develops further into the young adult he now is; full of plans and aspirations.

The future looks promising for Will as he takes that next step into adulthood. He completed his HSC this year and will now go on  to TAFE in Armidale to complete his Certificate 4 in Primary Industries. He is very focused and willing to work hard to get where he wants to be.

His interest in Primary Industry and his plans to start up a business in the area of agriculture has come about through his traineeship with Ranald Munro at ‘Cromarty’.

While communication was difficult to start off with, the true devotion of his fellow work mates helped Will to develop in areas of agriculture and livestock.
‘Will is a very enthusiastic person to work with and is always trying very hard”, said Ranald.

Being a teenager is a difficult period of a persons life but being deaf as well has made it even more challenging for Will but as Ranald also said, ‘He has never let his hearing get in the way of what he wants to do, he is responsible and works well in a team.’

Will has bought an 18ft open front header and is going into business with his father as a contract harvester and farm hand. His ambitions however go further than this with Will’s ultimate goal to be a farm owner or manager. His main area of expertise is in crop farming or livestock, mainly cattle.

His ability to work well in a team also comes in his ideas to become involved in share farming. He is extremely focused on achieving his ultimate aspirations, which shouldn’t be difficult as his hard working traits have earned him a well respected position in the community.

A further sign of Will’s community commitment, is his membership of the Bingara Fire Brigade.  When the fires of Killarney Gap, Bundarra and Keera, took over the land, Will was there every time, fighting fires, fearless and full of devotion to the land and his fellow neighbours.

“I fought fires for 16 hours straight one night during the devastation at Keera and surrounding properties and then turned up for school the very next day.”
Following the devastation of these fires, the Advocate understands that Will offered his labour, free of charge, to help the land owners rebuild fences and their properties.

Will is a boy, a man who has dismissed his own personal battles in an effort to support the community in which has embraced him with open arms, supported him over every mountain and allowed him to become the confident and inspirational young man he is today.

‘I’ve been very lucky,’ said Will, and indeed he has but in truth it is not Will who has been lucky but the entire Bingara community who have been blessed with such an amazing young man.

While his business these last few months has been slow to take off the ground, due to the wet weather destroying crops, Will is still very optimistic that he will one day own many farms and be a very successful business man.

With the determination and commitment he has already shown, Will is bound to be successful in his chosen field of endeavour.