Bingara’s John Peters spent Wednesday afternoon at Bingara Central School introducing Primary Industries students to several of his best dogs in a working dog demonstration. Mr Peters has been involved in working dogs for decades and has a passion for training and breeding kelpies, which he does through his Ashville Kelpie Stud.

Teacher Mr Mark McGowan collaborated with Mr Peters to bring the afternoon together, co-ordinating sheep and portable yards to allow the demonstration to go ahead. 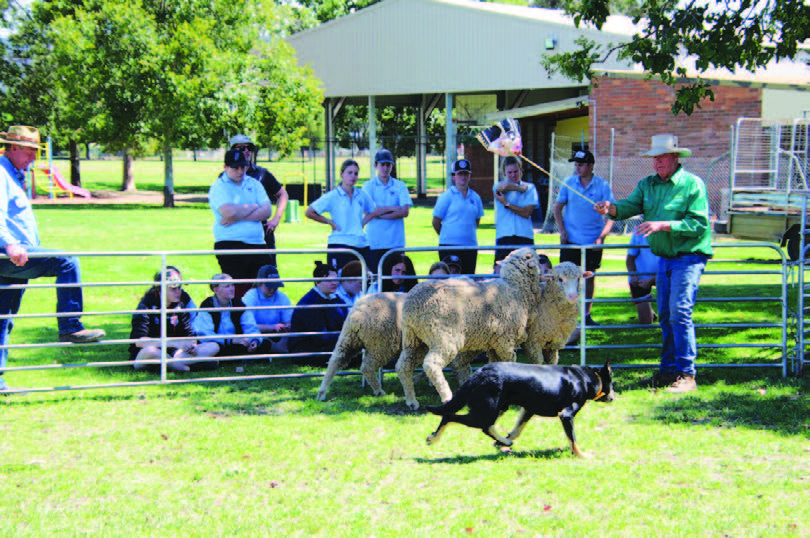 Mr Peters brought five of his dogs in a range of ages and experience for school group to see how they get a start and what progress can be made. “I was able to show the students what I do to get the dogs started, how I give the pups a look and you can see the breeding traits come out in them. You then start to educate them and give them commands,” he said.

“Then they could see the older dogs and how they progress after training them, giving the more commands and showing them what to do. Then when they get older and bigger you end up with a finished product when you don’t have to show them much at all.”

The students were impressed, particularly with the young dogs, according to Mr Peters, who said his ten-week old pup really showed off on the day. The students were then able to observe Mr Peters demonstrating and commanding a more advanced dog that can read your position and know where to be to work the stock.

The afternoon was such a success Mr Peters hopes that there may be further opportunities in the new year for students to see what happens in paddocks in an on-farm situation.