It was a bittersweet moment for the Bingara Central School Year 12 class of 2015 last week when they attended their final assembly and brought to a close their formal secondary schooling. While their minds are strongly focused on their upcoming HSC exams the six students were pleased to reminisce on their schooling at Bingara Central during a special farewell assembly held in their honour. 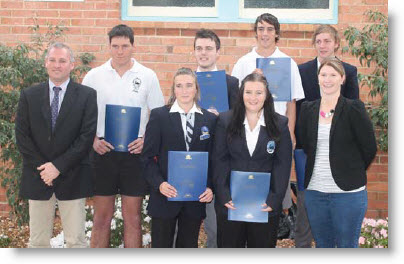 “On behalf of Year 12 I would like to thank all the teachers who have taught us throughout our schooling years and helped us to achieve our many goals,” said Vice-Captain, Shannon McGarrity.

“Being at Bingara Central for 13 years has had its ups and downs but I am thankful for every minute here, I am a stronger person and I achieved much more than I ever thought I would,” School Captain Maryellen added.

Year 12 year advisor Mrs Brooke Marshall provided a heartfelt address to the students thanking them individually and reflecting on what it means to succeed.

“It fills me with great pride to be standing here on behalf of Mrs Whitfeld and myself as your year advisers,” said Mrs Marshall.

“Today is a celebration, a chance to reflect on what probably feels like a lifetime of school when it’s really only the beginning.”

While one chapter ends another begins, as the six students all plan to embark on different careers paths following their exams, with some beginning traineeships, heading to university, finishing apprenticeships and continuing further education.