BingaraLatest NewsNorth West Theatre CompanyYou are invited to come ‘Walking on the Moon’.

You are invited to come ‘Walking on the Moon’.

In June 1969 mankind took first steps on the Moon. It was a momentous occasion full of daring, adventure and science with the political background of the ‘Cold War’ and the ‘space race’. American astronauts Neil Armstrong and Edwin ‘Buzz’ Aldrin, along with command module pilot Michael Collins were launched from Cape Canaveral aboard a mighty Saturn 5 rocket. 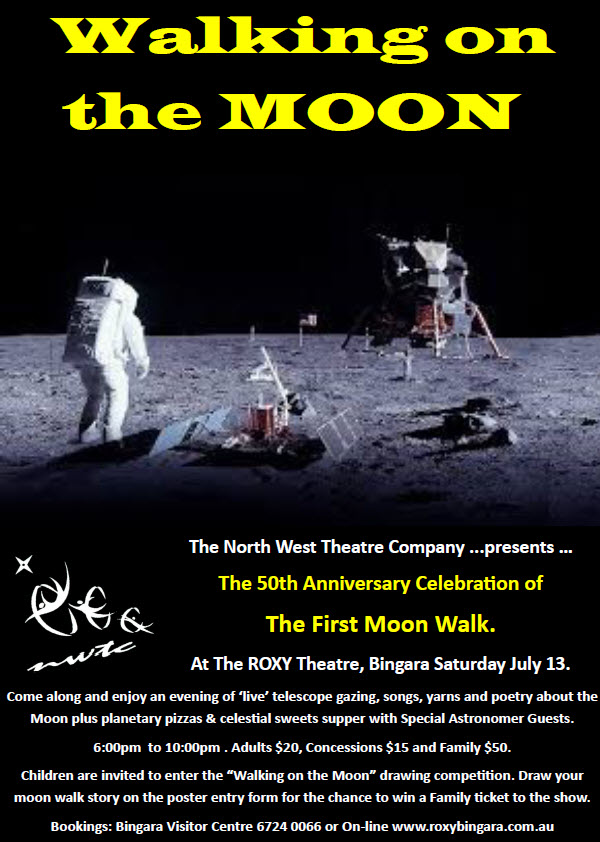 The success of Apollo 11 was followed by six more Apollo missions, five of which successfully landed on the Moon and returned safely to Earth. Only Apollo 13 failed to make the Moon landing but it too became the stuff of legend with the amazing feat of survival by its astronauts in the face of near certain tragedy.

Fifty years ago, the Moon walk engaged and amazed those who watched it on Earth on their black & white TV screens. Neil Armstrong’s famous first words, “That’s one small step for a man, one giant leap for mankind!” said it all.

In Australia the Parkes Radio Telescope beamed the first ‘live time’ Moonwalk to the world. It too faced a crisis, as a fierce storm threatened to ‘blow the dish off its base and send it tumbling through the wheat fields’ a dramatic event made famous in the movie “The Dish”.

The North West Theatre Company (NWTC) will retell much of that first Moon walk adventure on Saturday July 13 at the Roxy Theatre in Bingara. ‘Walking on the Moon’ will be a celebration, an evening of ‘moon gazing’ with music, songs and poetry about the Moon intertwined with some amazing science and astronomy.

Members of the New England Astronomical Association will bring their telescopes and Dr Donna Burton from the Siding Springs Observatory will be there to tell the story of that first Moon walk, and of the science and facts about the Moon and space travel. A big optical telescope will be set up in the Roxy courtyard and ‘live’ images beamed onto the movie screen inside the air conditioned theatre.

This will be a great evening for all ages. The ticket price will include a magnificent Moon supper with ‘planetary pizzas’ and ‘celestial sweets’ featuring. To be one of the lucky ‘Moon walkers’ book your ticket through the Bingara Visitor Information Centre obook on-line. Adult and concession tickets are available and a family ticket for two adults and two children is also available.

The members of the NWTC are looking forward to seeing you and lots of other earthlings at ‘Walking on the Moon’, on July 13.