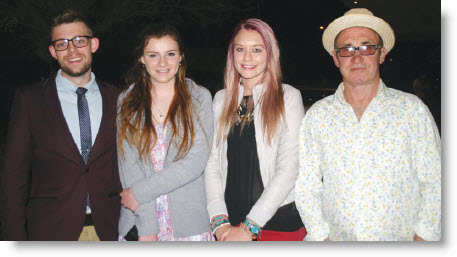 New England Mutual’s Communications Manager Victoria Brown presented the awards which are coordinated by the credit union on a theme which this year was “What could make a difference in your local community?”

Division One winners included Armidale City Public School with a film on the Armidale Community Garden, Students from Holy Trinity School Inverell took out second place with their film documenting the efforts of Inverell Rotary East and in third place, students from Inverell TAFE made a mockumentary on increasing the Christmas spirit in Inverell. Overall, the Division One prize winners took home $12,000, half of which will be donated back to community groups of the winners choosing.

The Division Two winners were Tayla Dawson and Jemima McLachlan who created a documentary style film about the Inverell Breast Cancer Support Group, with $500 for the winners and $2500 for them to donate to a community group of their choice.

Miss Brown told guests at the opening that the Short Film Challenge aimed to inspire young people “to really think about the achievements of their communities and improvements that could be made.”

“We acknowledge the power of film, whether it is in advertising and promotions or simply to portray an idea – and that is what we asked of our entrants this year,” she said.

“The criteria we set included the ability to celebrate a sense of belonging in their communities and we encouraged entrants to educate and inspire others with their ideas.

“The entries this year were a fantastic mix of humour, emotion and community spirit and we were very excited by the enthusiasm and originality of so many of the young film makers.”