Bingara Central School students and some teachers took an active part in Anzac Day services and the March on Friday.

Dressed in school uniform, the student leaders and younger students formed a significant block in the Anzac Day march. Many of the students wore medals on their right side chest, signifying they are worn for a relative.

School Captain, Gabby Rampling, and SRC member Kelsey Cooper played a part in the Dawn Service, and Gabby and Vice Captain, Lucie Boyle had official roles in the 11am service.

Also taking part in the 11am service, was Bingara girl and Year 12 student at Inverell High, Ellen O’Rourke, who had also marched with her father, Brian.

The Dawn Service attracted a crowd of 150 people, while over 200 took part in the 11am march and service.

Over 100 people attended the luncheon which followed the service. 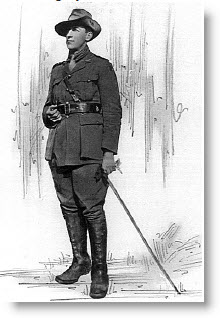 Guest speaker at the luncheon was Fred Robinson, who spoke about the extraordinary war service of Bingara man, Athol Baines Wearne, who landed at Gallipoli on April 25, 1915.  He was born at Bingara on December 10, 1893, and died on September 5, 1969, and is buried in the Bingara cemetery.

Athol Wearne enlisted on December 19, 1914. He was promoted to Second Lieutenant on November 25, 1915, and invested by King George at Saint James Palace.  He was recalled to service in World War II to the volunteer Defence Corps and commissioned as a First Lieutenant by the governor General.

For his services in France, Athol was awarded the Distinguished Conduct Medal. This medal is earned by an Officers’ total obedience to orders of his superiors and the acceptance of the man he commands to follow his every instruction without detraction or question and is based on their trust in him and the skills he possesses which he has imparted.

Almost every day, Athol wrote an account in a large number of diaries throughout World War I and II.

“Many suffered moisture damage, so many family members have re-typed as many as possible to allow his full history of events to be put together to allow a continuous record of his fine service,” Mr. Robinson said.

Mr. Robinson said that many of Athol’s diaries have been donated to the War Archive Libraries in the Australian War Memorial in Canberra.