Youngsters in Gwydir get to know their Councillors

Last week local librarian Gail Phillpott was very busy celebrating local government week, organising a number of activities in the Bingara and Warialda libraries and in events run in conjunction with the Bingara Pre-school and the Bingara Centrelink Agency. 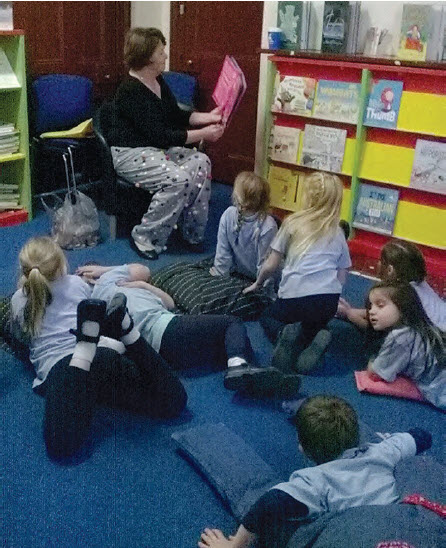 Cr. Egan reading to the younger children at the Library.

A story time session was delivered in Bingara and Warialda libraries by Deputy Mayor, Cr. Catherine Egan (in Bingara), and Cr. Curly Moore (in Warialda).

Cr. Egan got into the mood of reading to small children by dressing in pyjamas for her reading session. The younger children were enthralled by the rather colourful story read to them.

In recent weeks, older children have been studying Local Government during their regular book club at the libraries.

After she finished reading to the younger children, Cr. Egan was interviewed by the older children who have been studying local government.

She was asked about the role of Councillors, and how council works. Topics such as “What’s it like to be a Councillor, what do you do, what projects do you have on at the moment, and what’s planned?”

The Advocate understands the same process was followed with Cr. Moore in Warialda.

The children from both libraries wrote letters and presented these to the Councillors with ideas on what they would like to see in their communities in the next one, five and ten years.

At the Bingara Pre-school, Cr. Tiffany Galvin delivered three very well received stories, all about monsters, to a captivated audience.

Here too, there were ideas of what Council needs to do to make Bingara a better place.

“Build a big waterslide from the sky right down to the water,” was the request of the pre-schoolers, an amused Cr. Galvin reported.

The Bingara Centrelink agency hosted a promotional day where customers came and registered for the on-line My Gov portal and or app enabling them access, and the ability to combine all Human Services resources such as Medicare, Childcare rebates, Centrelink, health records, ATO and much more. This was a very popular promotion with 23 participants and 15 newly registered My Gov clients.