This year sees the first Gwydir/Willoughby Exchange program. In the past the program has been open only to young people from Bingara. The exchange has been going for 19 years now and next year will be the 20th anniversary of this steady relationship.

Students from Willoughby arrived Thursday 26 June to get a taste of the good life in the country and were welcomed by Mayor John Coulton at a special dinner held at the Living Classroom, Bingara. 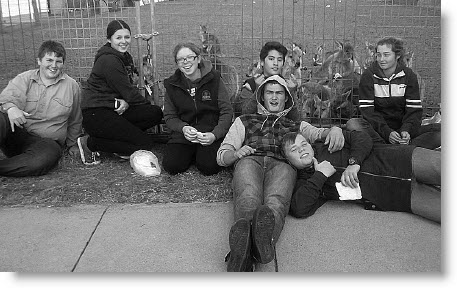 Students from the Gwydir Shire and Willoughby Council area got to know each other during the weekend at the Bingara Orange Festival. The Gwydir students will visit the Willoughby Spring Fair in September.

This year there were seven participants in the program. Ambassadors from Gwydir were Jorjah Coss, Tayla Brown, Mathew McNamara, and Kodie Hardy.

The Willoughby participants were Andre Tirddo, Brendan Piech and Caillin Betts. Accompanying them were John Woodward and Allison Lamaro from Willoughby City Council.

The students all stayed at the bunkhouse at the Living Classroom. This was great and the young people bonded really well.

The Gwydir itinerary was fully packed this year and included a tour of The Living Classroom, a morning at Bingara Central School including the Orange Picking ceremony and formal assembly, an afternoon of farm activities at Gravesend followed by a night at Croppa Creek Bowling Club. At the Club the young people got to play a few games of lawn bowls and even a muck around game of touch football with the locals.
The young people then attended the annual Orange Festival as well as a beautiful trail ride along the Gwydir River, feeding the kangaroos which was a massive hit with all participants.

The weekend finished with the traditional bonfire at Councillor and Mrs Pankhurst’s farm with a camp oven dinner prepared by Graham Bateman, Andrew Cooper and Ron Wood.

In September our young people will travel to Sydney to participate in the Willoughby Spring Fair and they are all jumping out of their skin to get there.