After going down to Garah-Boomi by half a point at last year’s Zone 8 Jamboree competition the Bingara Pony Club certainly redeemed themselves in 2015.

Well and truly getting the job done, the determined team of eighteen riders proved unstoppable over the three day event in Moree winning by a massive lead of 79 points coming out with an overall score of 238. 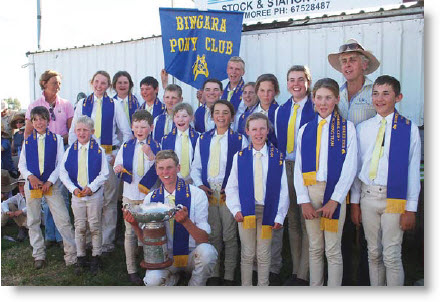 “It was great to see so many Bingara riders improve riding skills so much in the last 12 months under the guidance of Chief Instructor Sonia Coombes,” said Bingara Pony Club President, Sinclair Munro.

“The Bingara sportsmanship was excellent with all riders encouraging others so positively.” The Jamboree capped off a massive year for the Club with many competitions and rally days held.