A cast of thousands of local people

A series of films featuring local people and events has been edited into two hours of footage of Bingara between 1976 and 1982 and will be screened in October.  The films belong to local man, Peter Rose, and have been edited and put onto DVD by Tony Morehead.

Included among the events are the operation of the Woodsreef asbestos mine, Bingara’s protest car rally against a mooted amalgamation in 1977, building of the low level Riverview bridge, a football match between Bingara and Bundarra in 1979, the Anzac Day march in 1976, and events from Bingara’s bicentennial festivities, including a colonial themed race meeting, a reenactment of Alan Cunningham’s crossing of the Gwydir River at the Junction, and school children taking part in a mock court in the Court House, and other events. 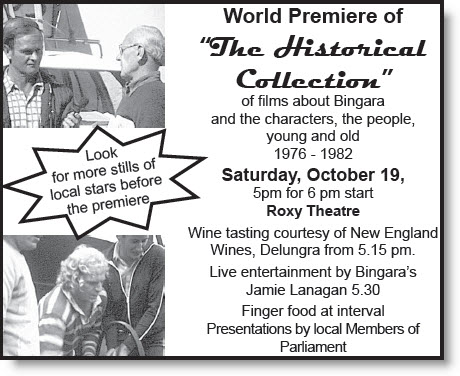 Featuring in the films are a number of Bingara people, many of whom are still living here.

The films will be screened at the Roxy Theatre on Saturday, October 19, probably from 5pm to 7 pm. Friends of Touriandi have been invited to participate, providing a light supper after the screening.

Mr. Morehead is making copies of the completed DVD which will also be available for purchase.