The North West Theatre Company’s latest production, ‘Lipstick Dreams’, was met with a very positive audience response when it opened on Saturday night.

The cast of four, headed by Nedine Young, put on a very strong performance. Others in the production were Rebekah Turner and Nikita Frazer, both on stage at the Roxy for the first time, and Johnette Walker, who first appeared in the NWTC production, Murdered to Death, earlier this year. 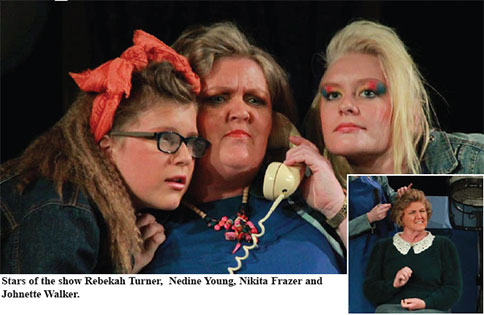 North West Theatre Company President, John Wearne, told the Advocate he had suggested ‘Lipstick Dreams’ with Nedine in mind, to take advantage of her singing voice.

“It was a good show, we have received many comments and compliments from the public,” Mr. Wearne said.

“We thought it was time to put on a more contemporary play.”

He noted that it is the second time the play has been performed in Bingara.

“Lipstick Dreams came to Bingara with the New England Theatre Company in 1987, and the lead was played by Lorraine Bayly. That performance drew an audience of about 60 or 70 people,” Mr. Wearne said.

“So far, 154 people have seen the NWTC production, and the four shows will play to more than 300 people.”

People who attended the first two performances were amazed to learn that Nikita Frazer and Rebekah Turner are 16 and 14 respectively. Both gave performances which belied their youth, and brought energy and enthusiasm to the stage.

The fourth cast member, Johnette Walker is no stranger to the Bingara MPS, but is relatively new to the NWTC. Johnette made her acting debut earlier this year as the butler in Murdered to Death earlier this year.

John Wearne was high in his praise of the production crew.

“We were absolutely delighted with the set, which was built by Paul Moulton and Geoff Leech.’

“Technical Director, Martin Hansford is invaluable, Susan Hutton again did an amazing job with the costumes. Nikki Galvin and Phoebe Jane did the make-up, Christine Fry is the stage manager, Ros Moulton is the producer, Lee Loudon the assistant director, and in the administrative area, Jenny Mead with ticketing, Meg Hanlon who designed the poster, Front of House, Tanya Heaton and publicity by Carmen Southwell, all worked well together to make the show a success.

“Of course, Director, Ben Daley, is a top notch professional. He first performed at the Roxy in 2005 with the NWTC production of Seven Little Australians, and has directed and acted for the company since then,” Mr. Wearne said.

For those who have yet to see ‘Lipstick Dreams’, there is still plenty of room for Saturday evening’s performance, but according to Jenny Mead, “Sunday is starting to go rapidly”.