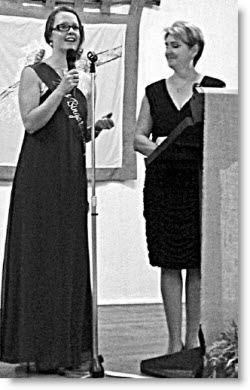 Judging took place throughout the day and was hosted by Barraba PA&H Association. The 17 finalists were interviewed at length during the day and attended a luncheon with the judges from the Agricultural Societies Council of NSW and The Land Newspaper.

A dinner that evening was attended by family and friends and the finalists were briefly interviewed on stage. Amy presented herself well and spoke confidently on her chosen subject of education in regional areas.

Of the 17 deserving finalists one from Walgett and one from Gunnedah were finally chosen to represent in the State finals at the Sydney Royal Easter Show in April.

“I have enjoyed the opportunity to be an ambassador for Bingara and rural NSW. The competition was more fun than I expected, and I look forward to opening the 2014 Bingara Show in March.

“I would recommend participation in the Showgirl competition and am keen to work with next year’s Bingara Showgirl entrants” said Amy.