The Bingara Central School had three students compete in this year’s Lions Youth of the Year Quest. Crystal Cooper, Ashley Frewen and Chloe Butler have been working extremely hard with Teacher Ms Naureen Taylor to develop the necessary skills to compete in the Quest. The Bingara Youth of the Year work started in June/July and culminated in the School final on December 14. 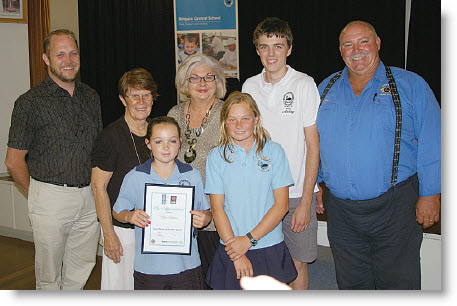 The Lions Youth of the Year Quest is designed to encourage, foster and develop leadership in conjunction with other citizenship qualities, this is usually done at the age when they are about to enter the fields of employment or higher education, and will provide them with the incentive to pay greater attention to the general qualities that are so vital in developing themselves into first class citizens. The qualities sought; apart from academic attainments are those of leadership, personality, sportsmanship, public speaking and good citizenship.

Youth of the Year is designed to encourage their interests in leadership and the qualities required to take an active and constructive role in the community. A high level of academic, leadership, sporting, public speaking and citizenship achievement is sought by the Quest. By emphasizing these qualities it hopes to provide outstanding role models for other youth and an overall increase in the confidence of young men and women with in the community.

The main activities involved in running Lions Youth of the Year include initial promotion of the Quest to the local community; judging of candidates at local, regional, District, State and finally the selection and announcement of the national winner. Arrangements are then made for the winner’s overseas travel and attendance at an International Youth Camp and other finalists travel throughout Australia.

Youth of the Year begins in June/ July and culminates with final judging and the announcement of the winners at the Multiple District Convention, normally held in May.

There are numerous levels of judging and requires candidates to compete at the following levels Club, Regional, District, State and National.

The final judging will be held at the Lions Multiple District Convention in April or May which is scheduled to be held in Tamworth.

Another part of the Quest organization is to select three community leaders from the Bingara area, we were very fortunate to have Mrs. Jan Rose, Mrs. Susanne Hughes and Rev. David Swan accepting the judge’s position. The judging of the students starts in the afternoon before and then culminates in the Public Speaking which is conducted at a Dinner. It is a lengthy process and starts with a 30 to 40 minute interview with general knowledge questions being asked of each contestant.

These questions are set by the judges and marked accordingly on the contestant’s responses and emphasizing leadership qualities, citizenship, academic, personality and general knowledge. In the evening the contestants are then given two impromptu questions when they arrive on stage.

They are then required to give a two minute response to each question. This may sound easy but is quite a daunting task for even the best public speakers! Once all the contestants have finished their impromptu questions, they are given a break and then come back for their prepared five minute speech.

The Dinner for the Quest was held in the Bingara Central School Auditorium. Traditionally the Dinner is a semi-formal affair. However this year the Quest had a Japanese theme as the School will be sending students to Japan this year. Naureen with the help of Scott Crispin and students cooked up a five course Japanese meal. The students were also dressed in theme and really topped off an exceptional effort on the School’s behalf!

Overall winner for this Year is Crystal Cooper, with the Public Speaking award going to Ashley Frewen. Chloe Butler also did a magnificent job and hopefully next year will be even better! The Bingara Lions Club will be holding the Regional Final on the 8th of March . This should be a great night as we are expecting Lions Clubs from Tamworth, Kootingal, Murrurundi, Nundle, Quirindi and Willow Tree with their contestants to be here.

The Bingara Lions Club would like to thank the Bingara Central School staff and students for all the hard work that went into running the Quest and also for the Japanese cuisine!