Bingara Polocrosse club is set to host the NSW Polocrosse Club Championships on the weekend June 6-8.

The small club of six adult playing members and two junior members are expecting large crowds to converge on Bingara in early June. 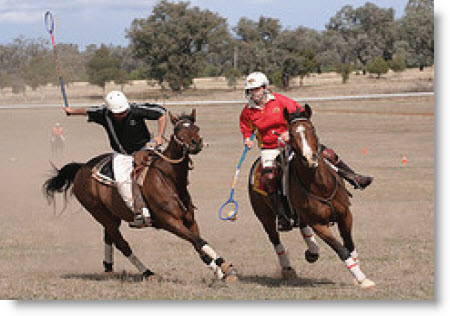 The NSW Polocrosse Club Championships sets clubs against each other in a variety of divisions from the Open Championship Grade, to Womens, Mixed Juniors and Sub Juniors. All battling it out to be hailed the best in the State.

“We were originally expecting about 60 odd teams but we have been told of several teams coming down from Queensland,”, said Bingara Polocrosse Club President, Louise Daley.

“We expected a few since we are close enough to the border for them to travel to. However we are now expecting about 10 teams from Queensland and even one or two from Victoria, as well as teams from most clubs in New South Wales.”

Polocrosse is played with six players per team so when calculated the small community of Bingara are looking at hosting approximately 500 players as well as travelling families and spectators. “We are very lucky to have the great facilities at Bingara Showground”, said Louise.

“A lot of other clubs don’t have access to the permanent facilities of the Bingara Showground. With the council’s assistance we have been able to install a permanent canteen and bar closer to the fields just in time for the Club Championships”.

“We are a small club, but we put everything into running these large events every five years, so that we can help promote the town and benefit the community who gets behind us every year for our regular carnival”.

With teams travelling from Victoria and the NSW/VIC border and as far up in Queensland as Tansey teams will arrive at Bingara a few days ahead of competition in time to rest horses and for proper preparation.

“This gives the players a chance to explore the Bingara township and surrounding areas, while they wait for play to begin,” said Louise.

Clubs within NSW hosts NSW Club Championships each year, however competition is open to any club within Australia who wish to travel and compete. Polocrosse Australia hosts a National Championship competition every second year in rotating states. The alternative year is dubbed the selection year. The next nationals competition is to be held in Albury NSW in 2016.