In his speech, Mr Torbay congratulated Andrew Cooper and his team for the job they had done in bringing the plant to fruition. He also congratulated Gwydir Shire Council for the “tremendous leadership” displayed in their approach to the project. “The need for Bingara’s water supply to be improved united the Council,” Mr Torbay said. 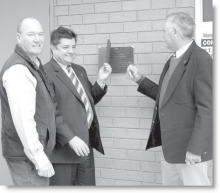 A small crowd, which included a number of representatives from the NSW Office of Water, NSW Public Works, Gwydir Shire Council, the staff involved in the project and some local residents, attended the opening of the Bingara Water Treatment Plant.

Mayor, John Coulton in welcoming everyone to the opening, said that he hoped the ceremony all went well, considering it was “black Friday”!

Cr Coulton had high praise for Town Services Manager, Andrew Cooper and his team saying that Andrew had overseen the project and kept councillors informed about the project from day one. 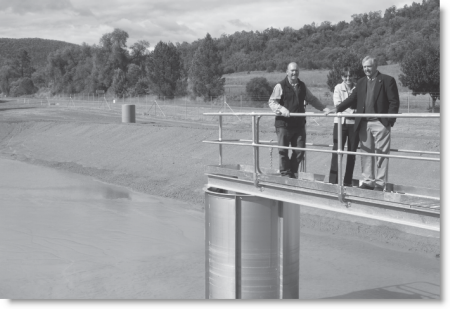 He also said that it was an historic day for the town and residents of Bingara, who have put up with a supply of water that has been not only totally inadequate, but which failed to meet the State’s water supply guidelines.

According to Cr Coulton, council was successful in receiving funding of $2,675,000 (+GST), which equated to 67% of the total project budget of $3,993,000 from the NSW Officeof Water under the Country Towns Water Supply and Sewerage Program for the project.  The publicity given to the existence of arsenic in the town water in 2007 provided the impetus for council to fast track the project.  Seeing the story hit media headlines also assisted Council’s case.

Mr Torbay told the crowd that what Gwydir Shire had asked for made history, in that more than 50% funding (which is the usual arrangement) was requested for the project. Council argued that it could not burden its ratepayers with the huge cost of the project.  The 67% contribution Council received from the State Government had never been achieved before.

“Other Councils will be trying to emulate Gwydir Shire Council’s example,” Mr Torbay said. “After a number of years of declining population in the Gwydir Shire, the trend has turned around, with good growth being experienced. With great infrastructure like this new water plant and new hospitals in Bingara and Warialda, growth can only continue,” he said.

Mr Andrew Cooper also addressed the crowd outlining the time line of the project and the details of the plant. He proudly concluded his address with the statement that we have completed this project “on time and on budget!”