Convenor of the Myall Creek Memorial, Graeme Cordiner and Friends of Myall Creek representative Ivan Roberts were both quick to point out that the Myall Creek Memorial and the proposed educational centre have bipartisan support.  This was illustrated on Sunday morning as Member for Northern Tablelands, Adam Marshall and Shadow Minister for Aboriginal Affairs, David Harris caught up after the first part of the day’s events. 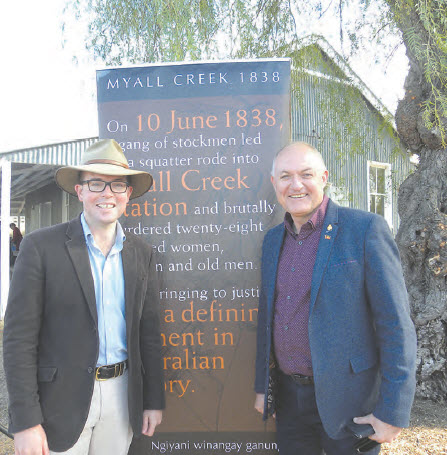 Last week, it was announced that the ALP promised $3 million for the proposed educational centre, the next stage of the development. The project also has the support of the current State government. In his short address to the gathering on Sunday morning, Mr. Marshall drew attention to a speech he made in Parliament last week. His speech is below:-

This Sunday, 10 June, marks the 180th anniversary of the massacre at Myall Creek, near Bingara in my electorate of Northern Tablelands. No doubt, “Myall Creek massacre” is a term that sounds familiar to many in this place; however, the details of that mass murder and many like it in Australia may not be as familiar to members as they should be.

This Sunday a gathering will take place at a granite memorial, on a ridge overlooking a bend of the Myall Creek. At that same place 180 years ago, near dusk, 28 valued members of the Weraerai tribe and part of the mighty Kamilaroi nation—men, women, children and babies—were set upon a group of 12 white stockmen, mostly convicts. They were shown no mercy; they were massacred by gun and sword, their remains dismembered and partly burnt. It is a dark stain on our country’s history.

National Reconciliation Week has just passed. As we know, this year’s theme was “Don’t Keep History a Mystery”.

As we gather on Sunday at the Myall Creek massacre memorial site, those descended from the Weraerai people will welcome all, including people who trace their connection back to the white settlers and convicts who were witnesses to the massacre. We will walk along the same path that those people took to their death. We will remember that awful day and stories will be told to ensure that the history of that massacre and many others will never be a mystery.  We will be generously and kindly welcomed to country. There will be singing and the lives of the 28 will be celebrated and remembered.

Once, this was a place of terror and sadness. Now the massacre site has evolved to become a place of learning, not retribution; and a place for conciliation, not conflict.

The Myall Creek massacre was only one of many similar massacres of that time and earlier— and it would certainly not be the last, sadly. However, it is, and should be, a touchstone of our history because of what followed. For the first time in our country’s history, most of the killers were brought to answer for their deeds. Seven of them were tried and convicted in a court of law. Execution for all followed—that was a first.

It is important to note that on 26 January that same year—that is, 1838—the Waterloo Creek massacre took place about 50 kilometres south-west of Moree, not far from Myall Creek. It is reported that between 150 and 300 people from the Kamilaroi nation were shot under the direction of one Major James Nunn. It is probably the largest massacre in Australian history and yet, the killers did so with impunity. That would be the story for most of those hidden crimes for another almost 90 years.

Modern Australia is better off for confronting such uncomfortable truths such as those presented by the Myall Creek memorial. Only by acknowledging that such things happened— by being openly ashamed that they happened—can we reconcile the past with the present and move forward together as one nation. I urge all Australians to learn and embrace that part of our history.

This Sunday I will humbly listen to the stories of my neighbours, remember the hurt caused and think about the way forward. Part of that redress of the past will be developing that iconic part of our history to encourage education and awareness all year round, not just on one day in June each year.

In recent years, the National Committee of the Friends of Myall Creek has developed an exciting plan to construct a state-of-the-art educational centre at the memorial site. Recently I met with the committee’s local representatives to receive an update on plans and discuss funding opportunities. The group comes together from right across Australia and is committed to the project. It will be a major development and one that will raise the profile of the Myall Creek massacre and the forgotten massacres.

Plans for the almost $10 million project are ambitious and I am excited to throw my full support behind the group’s plans to seek funding via an application to the New South Wales Government Regional Cultural Fund, which is part of the Regional Growth Fund. It is a brilliant project. I commend the Friends of Myall Creek national committee for its unstinting and generous commitment to increase the profile of the massacre memorial and to ensure that the history of the Myall Creek massacre—and many others like it— never becomes a mystery.