Over the last few months Sydney, Tamworth and other centres around the world may have had the new Star Wars movie, but on Saturday February 20th 2016, Bingara will hear the Earth being demolished by the Vogon Constructor Fleet to make way for a hyper-space bypass during the locally based North West Theatre Company’s (NWTC) launch of its 2016 performance season.

To launch the 2016 season, NWTC will present a Radio Play and dinner at the Roxy Theatre, the play will be The Hitch Hikers Guide to the Galaxy (Episode 1).

As this performance will include the radio play and catered for dinner, only table seating will be available.

Tickets for the Radio play and dinner are $25.00 per person including dinner with BYO drinks.

The Hitchhiker’s Guide to the Galaxy is a comedy science fiction series created by Douglas Adams.

Originally a radio comedy broadcast on BBC Radio 4 in 1978, it was later adapted to other formats, and over several years it gradually became an international multi-media phenomenon.

This production of The Hitch Hikers Guide to the Galaxy will be directed by Martin Hansford, someone who most patrons will be familiar with as a lighting and sound guru for the NWTC and Roxy Theatre productions.

For those who are regular attendees at NWTC productions, you will see several familiar faces on stage, as well as a new face to NWTC cast ranks.

Members of the cast include:

With Earth being demolished by the Vogon Constructor Fleet – Will our heroes survive this terrible ordeal? Can they win through with their integrity unscathed? Can they escape without completely compromising their honour and artistic judgement?

To find out book your tickets from the end of next week to be at the Roxy on Saturday February 20th.

The coming year 2016, is shaping up to be quite a busy one for NWTC, not only mentioned in previous paragraphs the Radio play The Hitch Hikers Guide to the Galaxy and dinner on Saturday February 20th.

Films during the year will include:

In the coming months bookings for Blithe Spirit will be available.  You can book for Hitchhikers Guide to the Galaxy NOW.

Bookings available online or call into or contacti the Bingara Visitor Information (in the Roxy Complex)
Phone: 02 6740 066 or
E:  bingaratourism@gwydir.nsw.gov.au 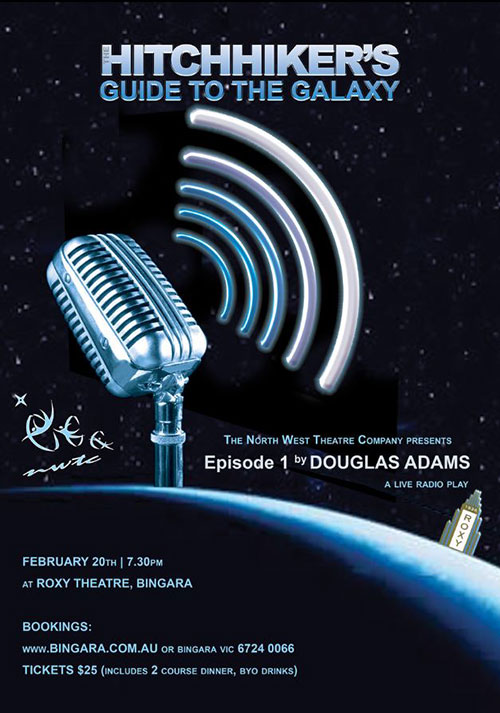