Bingara continues to be a popular venue for caravan clubs. Two clubs will be staying at the showground in the next few months. 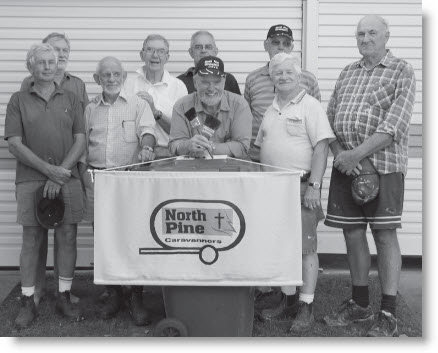 North Pine Caravan Club will be staying at the Bingara Showground on  September 14, 15 and 16. The club is a church based group, formally organised under the auspices of the Baptist Union of Queensland. With about 40 members who come from between Hervey Bay to the north and Beenleigh to the south, the club organises a fortnight long excursion called a “safari” each year.

Safari organiser, Barrie Harding told the Advocate that he has organised a trip that will take in the Darling Downs, Ashford, Bingara, Gunnedah and Narrabri.  Mr Harding decided to consider including Bingara on the itinerary having heard “glowing reports” from a friend who had visited the town with a Rotary group. Mr Harding said that the organisers also looked at the town’s website and spoke to Tourist Office, Jenny Mead before making the final decision.

“Jenny Mead has offered ‘magnifient co-operation’ since late last year, answering all our questions,” Mr Harding said. “We are greatly looking forward to our visit.” Club members are not entirely focussed on leisure. Each year members undertake projects in aid of others. Recently, club members returned from visits to two small towns in Queensland where they painted the manse in one and a welfare house in another.

Another group of caravanners will follow the North Pine Caravan Club to Bingara’s Showground. The Australia Caravan Club (ACC) is holding its annual “muster” there from October 10 to October 15.

Muster organiser, Tom Smith, who lives between Inverell and Guyra, said he hopes to see between 150 and 200 caravans attend the gathering. Mr Smith had heard about the successful CMCA Rally that was held in Bingara in 2008, which influenced him to contact Gwydir Shire Council about staging the function. “Council seemed very keen for us to come, as did the business houses,” Mr Smith said.

The main feature of the annual muster is the Annual General Meeting and reports from the Club Board. Other events, both social and instructive are organised for attendees. This year a farm tour is on the list of activities, as well as guest speakers who will address legal matters, computers and photography while travelling and working with trucks on the road.

According to Technical Services Director, Richard Jane, the caravan club will have a set up crew of around 30 come in the week before and stay the week after to clean up. During the set up week their members are going to paint the internal walls of the two amenity blocks at the showground. Council will be providing the paint for this project.

The Australia Caravan Club is a national organisation with more than 2400 members across Australia. Last year 148 vans attended the muster at Maryborough in Queensland.