A range of drinks invented by Bingara people is gaining in popularity, not only in Bingara, but further afield.

About 10 years ago, while on a visit to the Bonville Golf Club, Erik Ozols sought a refreshing drink, and asked for a half soda, and half beer.

His companions said “It’s not a shandy, is it?” to which Erik replied “No, it’s a Mandy, a man’s shandy”.

The name stuck, and Erik introduced his invention to patrons at the Imperial Hotel, where, he says, there are more and more chaps drinking it for the lower alcohol content and the flavour. He has also introduced the drink to his golfing friends at the Bingara Sporting Club. 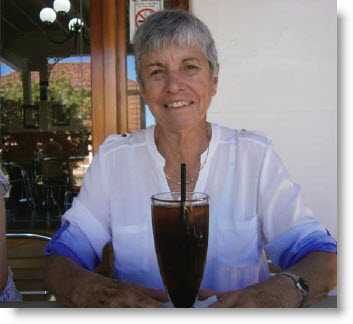 Another drink which is gaining favour at the Imperial Hotel is the cold coffee, invented by Toni Moodie.  “My mother and I invented it when we lived in Moree,” Toni explained.

“I was still going to university. It was so hot that neither of us could drink coffee, and we were having something like 10 to 12 cups of coffee a day.”

Toni and her mother experimented by making some really strong coffee, and put it in the fridge, and when it was cold, used it as a sugarless cordial.

“We each had a drink and put ice in with it, and decided it was pretty good, so we had cold coffee” Toni said.

“Of course, brewed coffee is much better than the instant we had then, which is why I think I’m addicted to this now.” 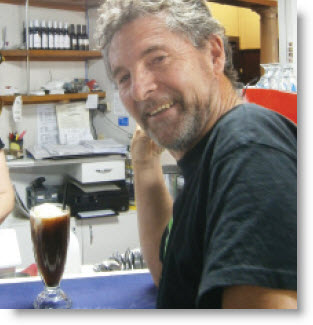 Another keen coffee drinker, Rick Hutton invented ‘The Ricardo’. “When travelling in south east Asia and particularly Cambodia, we found that they didn’t have fresh milk, and because of the hot climate, we had a long coffee which had espresso, water and ice,” Rick explained.

“Then if you wanted it, they could give you a scoop of ice cream on the top. It was very nice and refreshing. And when we came back to Australia and would ask for such a coffee, no one would have a name for it.”

The name ‘The Ricardo’, was coined by another Bingara man, Paul Moulton. Rick and Paul were travelling on the coast and stopped for a coffee.

“We wondered; if we go in and ask for a Ricardo, or ask for the coffee and when they say they don’t know that one, we would say, ‘Oh, we call it a Ricardo back home, everyone drinks it back home’, we will see how long it takes before it catches on.

According to Rick, some ‘very flash’ places would say “Oh I do not know of the Ricardo, what is this?” to which he would reply “We have them all the time back home”.

“We are still waiting to get somewhere and ask for it and people will know what it is. It hasn’t happened yet, except in Bingara,” Rick conceded.

Noelene Ozols confirmed The Ricardo is popular at the Imperial “Yes, it has taken off, with our customers anyway,” she said.

“A lot of people who drink black coffee are now drinking cold long blacks, and then some are adding the ice cream rather than ordering the normal iced coffee.”

At the Sportsman’s Hotel, barman, Mick Wade, said he does get some unusual requests for drinks, usually late at night, but the drinks he is asked for are ‘known varieties’, rather than Bingara inventions.

Popular at the Sportsman’s is the ‘toffee apple’, which is green apple vodka, lemonade and red cordial. “The girls drink that one,” Mick said.

“Then you have White Russians, but Brownie (David Brown) calls them ‘Delicious’ – which is just vodka, Kahlua and milk. That’s a normal bar drink.

Sweet wine and orange juice, like a wine spritzer but with orange juice rather than soda, is popular with older ladies.

Mick said that most of his customers are traditional beer drinkers, and hasn’t been asked for a ‘mandy’ nor does he sell many shandies.

“People come in for a beer, and they have a full beer,” Mick said “Some drink half new and half old, but that is pretty normal stuff. “After 13 years as a barman including seven years at the Sportsman’s, nothing I can think of that’s unusual, if you went to the RSL or to Inverell, you would get most of the drinks I have mentioned.”

Apart from beer, Mick says the most popular spirits he sells are rum and vodka.