Film Club is back!

The North West Theatre Company is delighted to be able to resume the Film Club at the end of this month and equally delighted to restart our season with a great film with a local flavour – Backtrack Boys.

Backtrack is the youth programme run by Australia Day 2019 Local Hero Bernie Shakeshaft in Armidale. It is a place for troubled kids to safely continue their education while learning trust, support for one another and to have faith in a world that has forgotten them.

Backtrack is the last chance for many of the mainly boys to halt a quick journey to jail and prove to the world that they are more than just delinquents with no future. 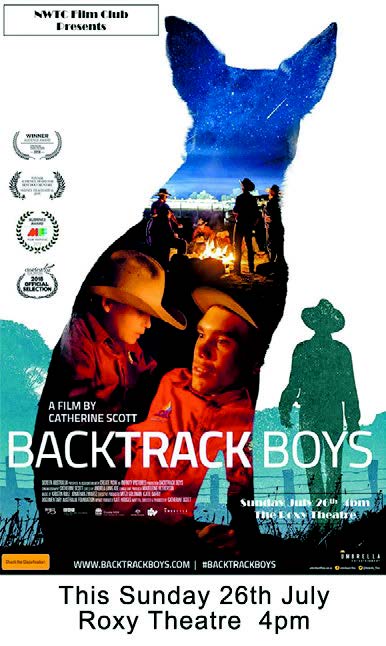 Bernie Shakeshaft spent years in the Northern Territory, where he learned from Aboriginal elders. They taught him to track animals and also how to ‘backtrack’, which was a way of thinking about where the animals were going to be tomorrow, not where they are today. With this in mind, Bernie uses dogs to help troubled youth back from the brink and appears to have had good results with this unconventional technique. The dogs and children are both a little feral, but the kids quickly learn that dogs don’t judge them.

On Bernie’s farm, the boys learn to control the dogs, work together and rely on their own judgement. The dogs don’t know it, but they are doing most of the teaching. Many of the boys are Aboriginal, but not all.

The film is structured around two or three boys, at different stages. Zak from Gunnedah is 17 and has blossomed under the Backtrack program, so that he now leads the ‘jumping shows’. These involve loading up the truck and taking boys and dogs to country shows to demonstrate their climbing skills.

At the younger end we meet a foul-mouthed blonde kid named Russell, aged 12, who arrives from Condobolin with a long history of problems. Russell is wild and untamed. He ends up befriended by a Great Dane, the biggest dog with the smallest boy. On the subject of Russell, the film does contain a fair amount of bad language!

Director Catherine Scott embedded herself for two years in this world and has crafted an inspiring and heart-warming film. Backtrack Boys is a film about a generation of young Australians from the fringes of society eager to become more than their circumstances would suggest. She is sensitive in telling these stories, shot most of it herself over a year and it is superbly photographed. She has gained remarkable access – even to boys in juvenile jails.

Bernie Shakeshaft’s humanity is obvious. Using dogs to instill self-reliance and discipline is brilliantly novel. The dogs release a lot of pent-up emotions in the boys and Bernie helps each boy work out what he needs to do for himself. One of the bigger questions is whether the program can be replicated. Does it depend on one remarkable man? In fact, we see that there are many people making this work, not just Bernie, and not just the staff . The kids have to work as hard as the dogs.

Backtrack Boys is a particularly good story and we are very pleased to be able to have it as our first post-lockdown film. NWTC will be adopting a number of COVID safe practices and so is asking members not to bring food to share. We will however serve soup and wine after the movie. Backtrack Boys will show at the Roxy on Sunday July 26th at 4pm. Membership for the remaining 5 movies plus the December mystery movie is $30.