Seventeen representatives from various stakeholder groups attended the session to hear how the upgrade had progressed and when completion was anticipated. 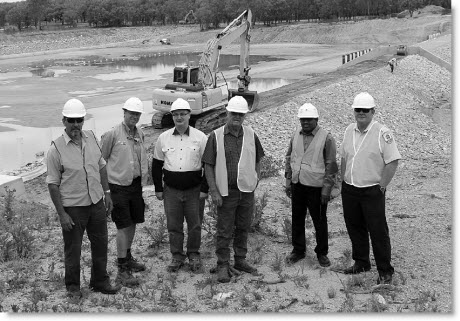 Copeton Waters State Park Manager David Allan said the operations and visitor numbers to the recreation park also have not been impeded by construction.  “Disruptions to the park were far less than expected,” Mr Allan said.

“The new recreational facilities provided through the upgrade had proven extremely popular over the Christmas period, with visitor numbers up on previous years.  We’ve had a big increase in camping sites over the past few months, with camping up 60-70% in November and December.”

Meeting attendees also had a tour of the site, seeing the almost completed new fuse plug spillway and reinstated Copeton Dam road.  Macmahon Contractors have finished three of the four spillway bays and commenced removal of the cofferdam.

Site restoration works are also underway, including tidying up, completing the fencing works and removing sheds and site infrastructure.

Rehabilitation works are also continuing with hydro mulch, a mixture of mulch, grass seeds and fertilizer, being sprayed to stabilize the soil around the site.
The project is scheduled for completion at the end of February.