They might not be household names, but the bands that rocked the Roxy on Friday night as part of ABC Exhumed, knew their way around a stage, and how to play to an audience. 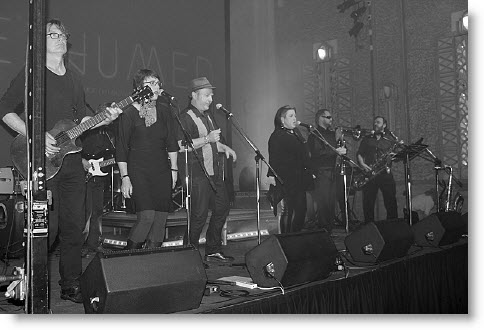 Al Heeny and the Rhythm and Blues Experience.

Three bands from Armidale and one from Narrabri were named as finalists in the inaugural ABC New England North West Exhumed band competition.

They were judged on main qualities, including their music, their passion and their presence on entries via the ABC Exhumed website.

First to take to the stage was a 10 piece band from the New England called Al Heeney and the Rhythm and Blues Experience.

With three lead vocals, guitars and a lot of brass the group wowed the audience with cover songs which showed off their versatility.

Armidale band Cheer Up John chose all originals to strut their stuff, including the very catchy Ladida Song, a favourite of staff at the local ABC.

From Narrabri, a fledgling band of just six years, came together with a great rock sound, and the Marlins (Middle Aged Rockers Living in Narrabri + Steve, who refuses to be called Middle aged) didn’t disappoint the crowd.

The Roxy Theatre proved a winning venue for the Exhumed competition, providing a fantastic stage and sound system under the expert hand of Martin Hansford, and music lovers, partners and friends of the four finalists gave the dance floor a work out.

The final band to take to the stage on the night was another group of old rockers from Armidale; Oldscool were classy in their delivery, and their passion for music was clearly on show.

But there can be just one winner going through to the State finals of the ABC Exhumed competition, and the high energy, bold and brassy Al Heeney’s Rhythm and Blues Experience will move onto the next level.

Keep an eye on the Exhumed website, later this month there will be an opportunity for you to vote as part of a people’s choice category. Come November, the whole Exhumed experience from across the country will feature on ABC TV.