At the 25th Anniversary Dinner Dance of the Double B Beef Promotion Association on Friday evening in Barraba, Garry McDouall and Don Capel, both past Presidents of the Association were presented with Life Membership to honour their contribution to the Association. 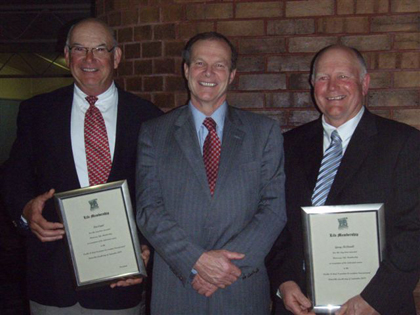 At the function, Mr John Whitfeld, the inaugural President of Double B, in his address, recounted how selling cattle had changed since the mid 1980’s. “At the time, against a backdrop of Bingara and Barraba saleyards closing as regular selling centres, cattle producers in this region wanted to maintain the identity of their cattle as renowned livestock and meat performers.” Mr Whitfeld said. “Beyond, our specialist cattle producer members were searching for information on post sale feedback and setting up supply chain alliances.” Mr Whitfeld continued.

Mr Whitfeld acknowledged the important contribution of Jill Whitby (nee Wilson), Joyce Bowman, Helen Doyle, Lissy McDouall and Georgina Sinclair as the administrators of the Association since its formation. “The significant number of people who have contributed as committee members over the years should not be taken for granted. Having a proactive committee is the reason Double B has contributed so much to its members” Mr Whitfeld said.

Mr Whitfeld mentioned the important role that alliance partners have played in marketing projects over the years. “Having Double B cattle producers stand next to their own product under their own label in a supermarket in Kuala Lumpur, Malaysia, is a world first” Mr Whitfeld said. Since 1994 an alliance with Objective Livestock Marketing has opened new buying and selling options for the Associations members.

“An individual producer has significantly more leverage in marketing if he joins together with like minded producers through the group. Over the years the Group has educated its members on a range of issues such as personal health, animal health, genetics and market risk. The result is an effective marketing group.” Mr Whitfeld said.

Mr David Palmer, Managing Director of Meat Livestock Australia and an inaugural member of Double B, in addressing the Association’s Dinner congratulated the Association on its initiative and the milestones it had reached over the years.

Presently, against the background of the global financial crisis, beef has a vital role in supplying the worlds protein. The growing middle class in China represent a new and exciting prospect for beef”. Mr Palmer said.

Members and friends travelled from as far as southern Queensland, Sydney and the coast to enjoy the celebration.