Lovers of rockabilly and all things 50s will be delighted with the line-up for this year’s ‘Happy Days’ themed Regional Australia Bank Bingara Orange Festival on Saturday 7th July. 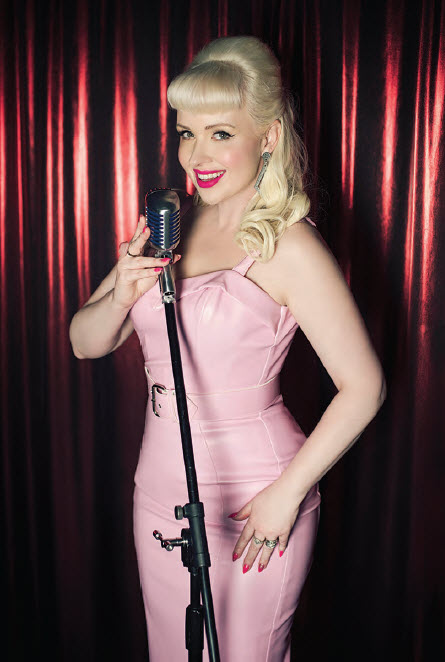 Shelley Minson will be performing at the Orange Festival.

Returning for a second year is the Sunshine Coast band Darlin’ & the Midnight Delights. Specialising in 1950s, 1960s and modern songs with a vintage vibe, Darlin’ & the Midnight Delights are a band of experienced musicians specialising in the accurate recreation of music from the 1950’s and 1960’s. They will take you to a time when men looked sharp in suits on Sundays, women wore Chanel dresses with Jackie O sunglasses, and international airports were the place to be seen.

By popular demand, Tamworth based singer Shelley Minson will be making her first visit to Bingara. Shelley sings her own style of Rockabilly and together with her guitar playing husband Lawrie they’ve made quite an impact in Australia and internationally.

Shelley recently celebrated the release of her debut album ‘Rockability’ with a launch at the Viva Las Vegas Rockabilly weekend in Las Vegas, and she has followed up with performances at the Gympie Music Muster, Shepparton Shakeout and Cruisin’ Country.  Shelley and Lawrie have recently played shows in New Delhi and Mumbai in India and are excited to be returning to the Gold Coast this June for the ‘Cooly Rocks On’ festival. H

Australian Music legend Ross Wilson has been a big supporter of Shelley and lent his song writing talents to the song Rockabilly Man. Shelley’s music and look is inspired by the great Rockabilly artists from the fifties and her shows are upbeat with songs made for dancing.

Both acts will be the perfect backdrop to what should be a great festival celebrating the music dance and nostalgia of the 50s and 60s.

Find out more about the 2018 Bingara Orange Festival >>