The Anzac Day Dawn Service, held under a magnificent clear sky with the near full moon still visible in the morning light, saw nearly 120 people gather in the RSL Memorial Park.

This number was slightly up on previous years. RSL Bingara Sub-branch President, David Young led the service which included the Prayer, the Recessional, the Last Post, the Ode, Reveille and the singing of the National Anthem.

According to Mrs Frances Young, there were a number of people keeping their feet moving on the cold ground through the short service. The hot breakfast at the club was well received by those who attended the Dawn Service.

The march down Maitland Street, which preceded the 11 am Anzac Day Commemoration Service, was well supported by ex-servicemen and women, along with representatives from many of Bingara’s organisations. 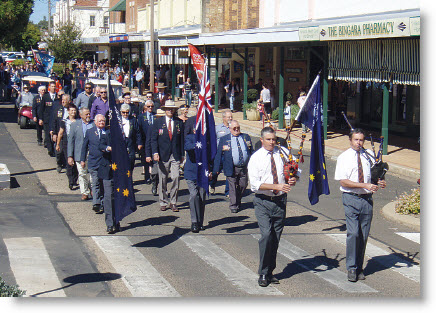 Pipers, Don and Andrew Mack, again led the marchers, with the rousing tones of the bagpipes filling the street.

There was an exceptionally good turn out of students from Bingara Central School, marching proudly behind Principal, Mr Mark Vale.

The crowd, which appeared thin in Maitland Street, filled the RSL Memorial Park, with shady spots in great demand.

By the time the service commenced, the seats were full and people perched where they could around the park perimeter while the rest stood. David Young led the service, beginning with his address.

School Chaplain, Brent Weightman played the last Post and Reveille, as he had at the Dawn Service.

It was stated on the evening news that record numbers turned out at services and marches around Australia to commemorate Anzac Day. Bingara was no exception.