Gwydir Ark has been active again and there are upcoming events on the calendar.

The most recent outing was a night spotlighting walk looking for nocturnal species in the Bingara Conservation Area.

Always popular but often hard to find are arboreal mammals of which Australia boasts a good number.  Perhaps the most famous of these being the Koala, depending on area some of the most common and destructive being possums and some of the cutest being the many species of gliders. The trip was successful in locating a group of Brush-tail Possums though Koalas and Gliders proved elusive.

Possums and Gliders generally require hollows in which they spend their days as do many of the species of Australian micro-bats and a wide variety of bird species. This means that for many iconic, and some lesser known species to survive and flourish, the protection of the older trees, and areas of habitat with many older trees, is critical. Isolated paddock trees become important components of a region’s wildlife and habitat survival, which includes providing critical protection for a variety of arboreal mammals as they move along the ground between more densely vegetated areas. 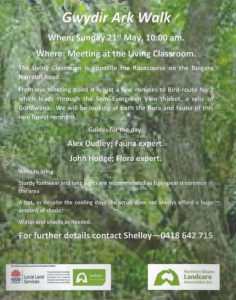 Night-jars were seen during the walk with other species of owls also heard. Generally, birds are less common at night but in the past there were common nocturnal species such as Curlews, or Stone Thick-knees whose numbers have collapsed since the introduction of feral animals, particularly cats and foxes. Isolated reports of sightings of these rare birds still occur, as with the re-discovery of the Night Parrot in two different locations in recent years. Species can be remarkably resilient!

Gwydir Ark is a citizen science group which is hoping to begin to rediscover species or environment types in this region. As winter approaches the focus changes to day events and the next event is a trip into a very ancient and very unusual piece of Semi-Evergreen Vine Thicket (SEVT) along Bird-route No 2 just off the Bingara/Narrabri Road.

This will occur on the 21st of May, meeting at The Living Classroom at 10am. The leaders are Alex Dudley and John Hodge both with remarkable knowledge in their fields.