“For some, it was the first time they had been on a train so the trip down was an exciting start to their weekend,” explains Youth Services officer, Alyse Steiger. Upon arriving in Sydney, they were welcomed by the Willoughby participants and it was evident that the friendship and camaraderie that they had built over the year was still strong.

On Friday, they travelled into Darling Harbour where they explored Paddy’s Markets, the Park followed by a ferry trip to Circular Quay before walking through the Botanical Gardens. That evening they were accompanied by Deputy Mayor, Catherine Egan for a Sydney Harbour Bridge Climb experience.

Unfortunately the bridge climb had to be cancelled before they could reach the top explains Alyse. “The wind speed had reached 112kms per hour which was too dangerous to proceed any further with the climb.” “They were disappointed that they couldn’t climb to the top, but they were fortunate to get onto the bridge and see some of the night lights,” said Alyse.

Saturday saw the participants take part in the parade at the annual Willoughby City Council Emerge Festival, pictured below, before spending their free time exploring the festival and Chatswood. 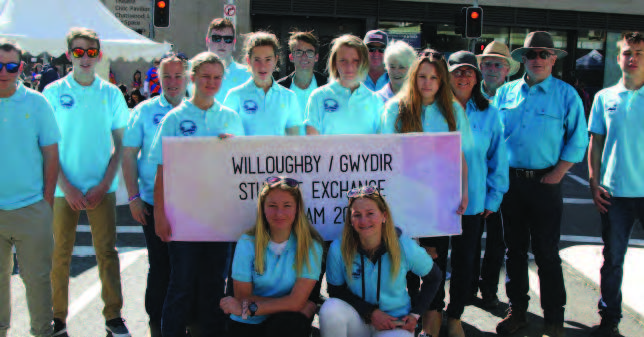 That afternoon, they travelled to Sydney Olympic Park for the final round of the NRL game between Canterbury Bulldogs and Brisbane Broncos. “It was incredible to watch a live game and I really enjoyed the atmosphere at Sydney Olympic Park with all the supporters cheering on their teams,” explains Will.  We were lucky enough to meet and get signatures and pictures with some of the Bulldogs players,” added Will.

The last day of the programme saw the Gwydir Shire representatives partakw in a bushwalk through the Explosive Reserve at Castle Cove before heading to Manly Beach for a surf lesson before saying goodbye to their Willoughby counterparts. “They were keen to head home on Monday as it is too crowded and congested in Sydney; they prefer the wide open spaces,” said Alyse.