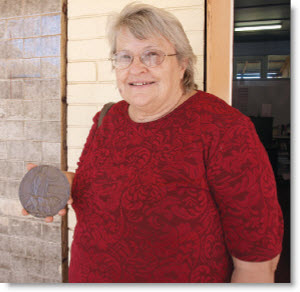 Some time ago, Bingara lady, Lyn Crawford (pictured left), found a small plaque at the bottom of a box of “goodies” she had bought at a Bingara garage sale. She had no idea how long it had been there.

The name on the plaque was Henry Oscar Nelson.

Seeking help to identify the significance of the plaque, Mrs Crawford contacted friends and neighbours, Debbie Bancroft and Helen Cornish.

Ms Bancroft gleaned the first piece of information, ascertaining that the plaque was given to the families of soldiers killed in the First World War. Mrs Cornish took up the research, going to the National Archive for more information. She discovered that Henry’s last known address was in Ryde, where his mother was living when he enlisted to go to war.

Following that lead, she rang the Ryde RSL Sub-branch and then the Ryde District Historical Society, which co-incidentally was undertaking a big project on World War I. 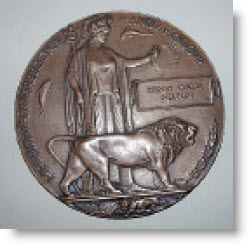 According to Mrs Crawford, Research Officer, Kim Philips at the Ryde Historical Society was very interested to discover all she could about the young Henry Nelson for her.

“She was really helpful and in the end, it gave me a really good feeling to be part of the search to find Henry’s family so the plaque could be back where it belonged after all this time.

“The lady it has gone to is four generations down from Henry,” Mrs Cornish said. Henry was killed in the battle of Fromelles, France and buried in the mass grave at Pheasant Wood. He was only 19 years old.

Recently, his last known relative contributed DNA to assist in the identification of his remains. Unfortunately, being from a female relative, the DNA test was inconclusive.

The relative, whose identity has not been revealed to Mrs Crawford, already has received Henry’s “dog tags”, his diary and postcards. She should now have received the plaque also, which Mrs Crawford posted last week.

“I was intrigued to find out all I could about the plaque and then to get it back to the family. It was very satisfying to return it to whom it belonged,” Mrs Crawford said.

How the plaque came to be in a box in Bingara remains a mystery.