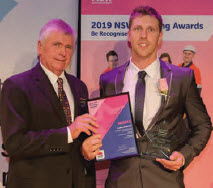 Justin was nominated in recognition of his outstanding academic and on the job performance. Justin was originally employed as a casual labourer however his talent and aptitude were recognised and he was transferred onto the Council’s Trainee Program as a Trainee Plant Operator. As part of this traineeship Justin was required to undertake a Certificate III in Local Government Operational Works, which he embraced with the same level of enthusiasm that he approaches all his tasks and Justin finished his studies early.

Since completing this training Justin has acted as a supervisor on a number of operational projects putting into practice the theory and practical skills obtained through his traineeship as well as his other diverse toolbox of skills and natural leadership ability. Justin has been observed empowering others through educating them in his areas of expertise.

Council was well represented at the Awards evening in Tamworth on 28 June 2019. General Manager, Max Eastcott said “It was a delight to be at the Award Ceremony and witness this humble and unassuming young man be announced as the winning trainee.” Justin will be representing this region in the overall NSW Awards later in the year and hopefully representing NSW in the National Awards as well.